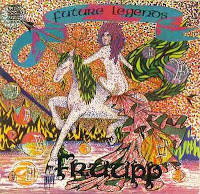 Among the underground prog rock bands, Fruupp always and still are one of the best underground cult bands to come out of Northern Ireland. Adding their taste of symphonic music, mixing it with; Jazz, Classical Music, and Story-Complex songs in an Irish sort of taste that will make your skin crawl, These four albums finally reissued on the Esoteric label, shows Fruupp they couldn’t let go without a sign of warning, if they’re paying homage to Genesis, Gentle Giant, early Yes, and Family. Formed in 1970, they settled as a foursome which featured; Stephen Houston on Keyboards, Vincent McCusker on Guitar, Martin Foye on drums, and Peter Farrelly on Bass guitar and lead vocals. The band played in small clubs and doing some gigs as the opening band for Genesis and Queen while taking a break from the road and touring and then going into the studio and recording their only four albums which are here in this review.
Future Legends released in 1973 on the Dawn label, their first album, became a lushful watermark debut, which features some melodic beauty and dynamic plus dramatic melodies that will blow your socks off. Songs like the Beethoven medieval rocker, As Day Breaks with Dawn which has this fast-tempo beat and soft and lukewarm finger picking guitar sound while Peter is doing this ghostly sound on the vocals and then a 1-2 beat including a synth following the beat which is very Italian-like sound while Graveyard Epistle and Lord of the Incubus are very symphonic meets sinister backgrounds to fill the tone of the number that is very pastique and very Peter Gabriel-like on the pieces. Highlight is the 5-minute Old Tyme Future, a combination of classical piano meets a cross-over between early symphonic prog, emotional ballads, and the mind of ballet dancing for the ladies.
Seven Secrets which was their follow up to their debut album, sees Fruupp go into more of a Christian Prog Rock territory with a taste of the rural life with an influential background, this time the band go back to their early roots of the baroque classical music taste-test again with the introduction of the 8-minute piece, Faced with Shekinah, one of the touches of the symphonic music of the 18th century in Ireland starts off very Ina Boyle like and then becomes a Tchaikovsky roller-coaster rocker puzzle piece with a taste of Gentle Giant’s first four albums while Wise as Wisdom is more out of a lost track from Giles, Giles, and Fripp’s first album; White Eyes, Elizabeth, and Three Spires are almost a tribute to J.R.R. Tolkien’s Lord of the Rings trilogy and Bilbo Baggins ala rock musical style. And the tour de force Garden Lady, just proves to show it doesn’t give up with Farrelly’s uprising vocals while Stephen Houston is doing a magnificent organ solo and McCusker is doing an ELP style on his guitar which goes to show you can still enjoy prog a lot better than the kings of prog from Yes or Jethro Tull could influence today’s music generation.
The Prince of Heaven’s Eyes which was Fruupp’s first concept album released in 1974 and the last one to feature Stephen Houston before a born-again Christian and appearing on the Trinity network, this is one of the best albums that put them on the map of all concept albums before they were called dull which they are not. It tells the tale of a young boy name Mud Flanigan, who travels after the death of his family to search for the end of the Rainbow. And it not a bad album, it’s a stupendous masterpiece, Crystal Brook, It’s All Up Now, Prince of Darkness, the country twangy instrumental Jaunting Car, and parts of the female friend, Annie Austere are imperial awe.
After Stephen Houston left, John Mason took over as they released their final album, Modern Masquerades which was produced by King Crimson’s Ian McDonald, sees the band going into a Jazz Fusion style ala Yes meets King Crimson John Wetton-era style. Pieces like; Misty Morning Way, Masquerading with Dawn, and Sheba’s Song carry the magic, but it wasn’t the same as they broke up at the beginning when Punk Rock was happening in ’76. But these 4 CDs defined Fruupp’s background to get into their taste of music. What next a classical rock opera?
Posted by znathanson at 11:43 PM