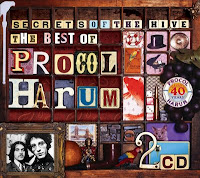 Though most of the Progressive Rock kings were being slammed by critics as they were performing at gigantic stadiums and selling out to the mainstream devil as they begin to dwindle in the late ‘70s, but for one band that never did anything like that as they were ahead of their time and they still are growing strong from two composers of Keith Reid and Gary Brooker, Procol Harum made some excellent albums in the psychedelic-era with the first four albums in the late ‘60s and the beginning of 1970. The band called it a day in 1977, after releasing their last hit single in the UK top 20, Pandora’s Box and then reformed back in the ‘80s with various line-ups, but their compilations has it ups and downs, including The Best of Procol Harum in 1973, Procol Harum Greatest Hits (US Version) in 1996, and the 2002 release on the Metro label of the title track which featured from their self-titled debut album to Home released at the beginning of 1970.
With 57 tracks on this beautiful 2-CD set, celebrating their 40th anniversary, and four decades later, Secrets of the Hive: The Best of Procol Harum is by far one of the best compilations to relive of Procol Harum’s story from the past, present, and future from their psychedelic-era to the glory days of Progressive Rock. Beginning with their hit single of the gospel soulful R&B funeral ballad of the hit single, A Whiter Shade of Pale, A Christmas Camel, Quite Rightly So, to the early beginnings of Proto-Hard Rock with Long Gone Geek, Disc One shows their anthology of the sounds of when Reid and Brooker moving away from the pop scene of the mainstream and writing their own songs and pleasing their audiences. The unbelievable live version recorded for their Edmonton Hall performance of the sinister mourning take of A Salty Dog, shows proof of Procol Harum’s songwriting technique, which doesn’t show off and doesn’t suck big time in a classical composition of their magnum opus including a symphonic touch of their song based on the Spanish Explorer of the 15th century, Conquistador. Having some amazing songs that would blow you away such as, All This and More, Homburg, Shine on Brightly, The Devil Came From Kansas, and Grand Hotel which are included for the first time before the band took a day off in 1977 with the release of their Jazz meets Carousel Music ala synthesized of the baleful single, Pandora’s Box.
Although it could have been a 3-CD set with some absence is the 17-minute epic, In Held ‘Twas I, The Dead Man’s Dream, Lime Street Blues, The Milk of Human Kindness, and the masterpieces Skip Softly (My Moonbeams) and Rambling On, but the compilation has done a good job of covering from the late ‘60s to the 21st century from their 2003 songs including; Into the Flood, Weisselklenzenacht (The Signature), A Dream in Ev’ry Home, and (You Can’t) Turn back the Page. From the ‘80s and the 2000’s Brooker and Reid, The Prodigal Stranger, Into The Flood (Live at Edmonton, 1992), and The Well’s on Fire which was a tribute to the September 11th attacks in 2001, all show their magnificent glory on this 2-CD set.
From line-up changes and going to hell and back, including a lawsuit which dealt with organist Matthew Fisher suing Brooker claiming that he wrote part of A Whiter Shade of Pale and winning the case but only getting 40% of the authorization instead of 50% which he wanted on the copyright, but all in all, this compilation is a must have for anyone who’s a huge fan of Procol Harum or a younger generation of fans who are discovering Prog music could really get a kick out of this on how important Procol Harum are one the best bands to come out from an amazing time period.
Posted by znathanson at 2:22 PM