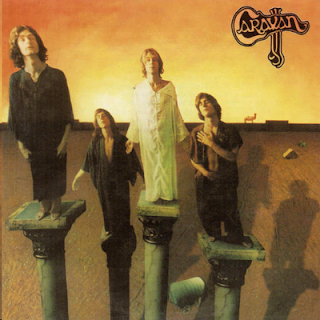 It’s not your typical Canterbury prog album that put Caravan on the map of the late ‘60s. The original members started out in the early days with members of The Soft Machine
from 1964 to 1967 before going into different groups which would become part of the prog and psychedelic movement. Even though the Soft Machine were vicious and avant-garde with the first two albums, Caravan were more calm and very much relative to the Beatles with their self-titled debut album released on the Verve label in 1968.
The opening track Place of my Own is spot-on perfect with its psychedelic mod groove, Pye Hastings sings beautifully as Dave Sinclair’s Hammond organ does its homage to the bebop jazz scene of the late ‘50s, Policeman has a Beatles relative touch while Love Song With Flute shows Caravan’s mellower side, the roaring sinister track of Cecil Rons pays tribute to the crazy diamond of Pink Floyd, Syd Barrett with its explosive voice from Hastings and the booming sound on Richard Coughlan’s drums blows the roof down on the floyd’s first singles Arnold Layne and See Emily Play, their first single, Magic Man, is a magic carpet ride beauty set with a dreamy organ, bass, and guitar tone to the song as Pye and David sing about the Magic Man high above in the sky.
The album is also like I’ve mentioned before, dreamy with its Indian relative sound with the booming sound of the tom-toms done well by drummer Richard Coughlan as he and the band take it up an notch with Ride, and while they have a sense of humor with another floyd relative number of Syd’s singles with the band and their first album by saving enough money with the psychedelic pop sound of Grandma’s Lawn, the last number Where But For Caravan Would I? closes the album with its 9-minute composition. The instrumental arrangements of the suite sees the band moving into the deeper waters of experimentations. It has that evil tone in the midsection of the organ piece as David Sinclair just takes over the instrument. As the group went forward to the land of grey and pink, their first album is an essential classic. It shows how good for life to be fun. The music and the tracks including their next single which appears as a bonus on the reissue, Hello Hello, is excellent.
Posted by znathanson at 2:01 AM