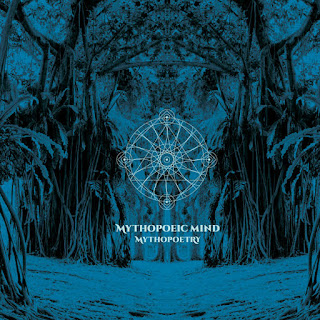 I don’t know how long since I had listened to Panzerpappa for, but saxophonist Steinar Børve who is also a founding member of the group, wanted to go beyond the Progressive Rock genre with his Symphonic project, Mythopoeic Mind. The genesis behind this new album Mythopoetry, goes back 22 years ago.

Steinar used music and stories from J.R.R. Tolkien’s classic, Lord of the Rings in Songs from the Red Book of Westmarch which he performed at the second Nordic Tolkien Festival. It also featured Trond Gjellum on drums the pair forming Panzerpappa with Knut Tore Abrahamsen and Jorgen Sklulstad the following year.

For his solo release, Steinar wanted to put aside the RIO influences of Panzerpappa and try more story-based ideas. This year with Mythopoetry, he brought that project to life. Featuring in Mythopoeic Mind are; Gentle Knife’s Pal Selsjord Bjørseth on keyboards and trumpet, Pymlico’s Arild Brøter on Drums, Kjetil Laumann of ‘90s Avant-Metal Band Dodsvek, and Glutton & Artiofredag’s Bassist Ola Mile Bruland, and all of the members from Panzerpappa.

The recordings took place last year from various locations from January to May and mixed by Trond at Rislum Studios from May to July as White Willow’s own Jacob Holm-Lupo did the mastering in July that same year. Released on the Apollon label, Mythopoetry is like a journey between the land and the myths and legends from the Tolkien stories with some mind-blowing highlights that would keep you guessing until the end.

The trippy sounds of sax, guitar, and keyboard work on Prey shows the listener some of these mysterious sequences Bjorseth sets sail on his framework. Kjetil handles a cool reverb effects on his vocal arrangements. Steinar had listened to some of the compositions that Van Der Graaf Generator wrote as he embarks with David Jackson’s sax as Brøter’s drums and Anders Krabberød’s chapman stick going into a walking up and down sequences from the spiral staircases on Mount Doom.

With cowbell in one hand, Mythopoeic Mind understand the history of the RPI (Rock Progresivo Italiano) genre very well. And it gets very dark from the electric piano as they head backwards as they head back into the caves and discover this flaming fire that is ascending down the mountain tops.

Sailor’s Disguise clocks in at 13 minutes and 40 seconds. You can hear the sound of these wind-generated waves from the ocean and the echoing call from Bjørseth. It then begins to show that there is some sign of dry land in the horizon’s before Ktjetil’s vocals, and Jarle’s acoustic waltz sets up the notion that the anchor is about to drop at any moment for some time signatures that can be quite the challenge. Ola’s bass sets sail to search for dry land throughout the storms that makes it intense and rough.

This here was a very interesting album that almost didn’t grab me at first. But after a few listens, it was worth the wait to hear what Steinar had come up with. And I hope that he continues to do more adventures with Mythopoeic Mind in the roaring '20s.

Posted by znathanson at 6:34 PM