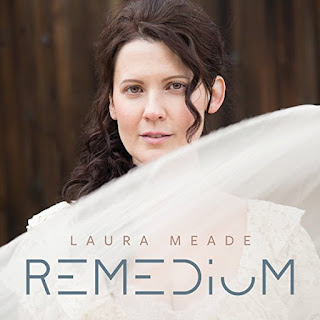 IZZ’s Laura Meade has released her solo debut album this year entitled. Remedium. There is some sorts of Art-Pop, Progressive, and Electronic atmospheres on her solo release. But there’s a theatrical background that Laura has brought to her music. It’s sort of similar to what Schooltree had done on their 2013 debut, Rise. Laura has shown that she’s just a member of IZZ, but beyond the band and taking her music on a journey she takes the listener into.

Now I will have to admit, the only IZZ album I reviewed was in March of last year on my blog site of Ampersand, Volume 2 on Music from the Other Side of the Room, and while I’m not a gigantic IZZ fan, I do respect the accomplishments they’ve achieved. Remedium shows Laura spreading her own wings to fly and see what is out there beyond the far horizons.

The opening track, Sunflowers at Chernobyl, begins with this synthesized electronic loop done by John Galgano and showing that while there might be a sign of hope, the radiation shows that there’s no chance of returning home. It then changes into a prog-pop moment for Laura Meade as she channels Klaatu’s Hope-era as Galgano’s bass and drums sets up the countdown reminiscing of The Loneliest of Creatures and Prelude.

There’s this trip-hop section that makes it futuristic of what will happen in the near future of the 22nd century of Pripyat. The nod to the Canadian Progressive Rock band of Klaatu shows Laura tipping her hat to them and knowing it’s time to give the group the recognition they finally deserve. There’s this cross between Country-Folk and Jazz combined into one on Conquer the World.

Galgano’s guitar sounds at times like a mandolin before doing a Thelonious Monk section in which he also tips his hat to the master as he does this walking jazz section before going back into the country yet folky approach again. The Old Chapel at Dark gives Galgano channeling Gyorgi Ligeti’s Musica Ricercata on the 2-minute instrumental with an eerie piano before seguing to the acoustic guitar with the 11-minute epic, Dragons.

Laura sings this beautiful lullaby in a surreal Ligeti twist. Laura is warm, gentle, and relaxing in her vocal arrangement as if the calm after the storm is finally over but then the nightmare is revealed with an experimental twist from these hay-wiring effects as an homage for a couple of seconds to Web’s Concerto for Bedsprings on their third studio album in 1970, I Spider.

You have this trippy effect and the dystopian scenario that is coming at a larger approach with a new-wave pummel as Laura’s vocals becomes a little operatic and her characterizations on here is that she becomes the new ruler of this wasteland and she rules with an iron fist. The music becomes a surreal fantasy between Radiohead’s Kid A and Bjork’s Homogenic combined into one.

Near the last couple of minutes of the epic, it switches back into a mournful piano section a-la Schooltree in the style of Heterotopia as if Lainey and Laura had worked together by collaboration and bringing this theatrical conceptual storyline to life as if the flower itself has grown brighter and brighter.

Every Step is Laura’s nod to both Jane Siberry and Tori Amos. She goes through these haunting passageways as the drums, piano, and bass go inside this deep cavernous location and it is setting up this ominous presence that is every walk that you take through these haunted corridors.

Remedium grabbed me through and through and bit by bit. Laura shows her amazing chops between the art, pop, and theatricality she brings to her solo release this year. And I hope that she continues to do more as both as a solo artist and her work with IZZ for many years to come.
Posted by znathanson at 8:52 AM