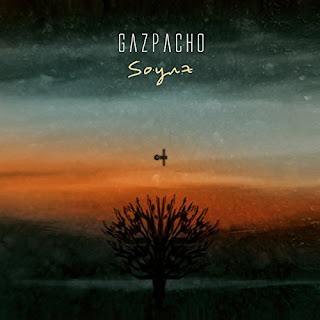 It’s been three years since Gazpacho released any new material since their 2015 album, Molok. Since my introduction to their music came back four years ago when I was entering my final semester in Houston Community College after hearing Demon, Gazpacho are still the band to bring the stories to life. And they tell it through the ambient, experimental, atmospheric, art, and experimental vibrations from start to finish.

Soyuz is their tenth studio album released on the Kscope label. The themes behind their new album is about how the moments that we had, we’re beautiful, will soon be gone. The people are stuck in this time frame that describe the situation that there’s no chance of going forwards and being stuck in both the past and the present. The name comes from the tragic tale of the Soviet Space Program that launched into Orbit on April 23, 1967 carrying Colonel Vladimir Komarov who was the first crewed flight on the space craft.

Gazpacho’s new album grew on me more and more for the stories they would bring to the kitchen table and Soyuz is another return for another adventure with the band. Hypomania begins with this Morse Code guitar introduction and it goes into this post-rock version of The Smashing Pumpkins Melon Collie & The Infinite Sadness-era as Kristian Torp’s bass delves deep into a rhythm followed by the alarming guitar riffs and heading into the nod of Billy Corgan’s rhythm on Zero as it hits perfectly like a ship that is exploring infinite universes.

Exit Suite starts off with this mournful Monk-sque chant introduction before the piano and strings set up the moment for the credits to roll and showing there’s a sign of hope while Emperor Bespoke which is based on Danish author Hans Christian Andersen has this banjo-sque folk-like tale featuring a brief ‘80s synth for a brief-second on the introduction before Thomas Andersen takes the piano and delves into Hans’ stories.

I felt that Gazpacho were doing this score to the non-disney version of The Little Mermaid as Jan Henrik Ohme’s vocals sends shivers down my spine whenever he sings. And he does it perfectly. But the 13-minute composition of Soyuz Out is where the ingredients come out to make the perfect slice of cake. It has these mysterious and trippy atmospheres that Gazpacho do on the track.

It’s psychedelic, heavy, and electronic. And it’s almost as if the band are putting the puzzle pieces back together in one place. The band are like detectives searching for more clues to see where the evidence is leading in this setting of the futuristic dystopian wasteland. The clues get even bigger and bigger thanks to the rhythm section as Robert Risberget Johansen who makes his return to the band on the new album doing these militant drumming as Jon-Arne Vilbo’s guitar and Kristian’s Bass bring the twist to life.

Soyuz is not an easy album from start to finish, but for me it’s another adventure for Gazpacho to bring this new release to life. It took me about six or seven spins to enjoy this from start to finish. Gazpacho never disappointed me with their new album this year. And I hope they’ll do a score for either for a movie or a video game in the near future. Let’s see what they’ll cook up with next.
Posted by znathanson at 8:20 AM