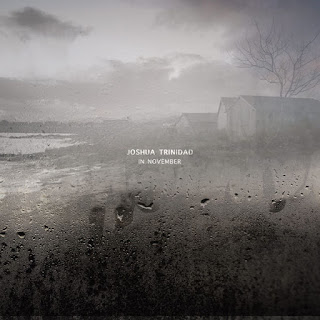 Joshua Trinidad is from Denver, Colorado who has performed with bands and artists such as The Mars Volta, Cake, OK Go, George Clinton of Parliament Funkadelic, and The Colorado Wind Ensemble. He took the Trumpet when he was seven years old and studied from the masters including Hugh Ragin, Walter Barr, Al Hood, and Ron Miles. Not only that he worked with them, but it helped him on where he is right now.

This is seventh release and his making his debut with the RareNoise label with In November. It was a dream that he brought to life. The collaboration between him along with ECM artists that included guitarist Jacob Young and drummer Stale Liavik Solberg, it is in my opinion, a perfect match, perfect team, and a perfect combination to bring the ingredients to the kitchen table.

Recorded in four days in November of 2015 at Ocean Sound Recording Studios in Ginske, Norway, the album nearly sent chills down my spine. And it shows the trio almost as if they recorded the album inside a cottage in the middle of Oslo as temperatures dropping down to minus 22 degrees in the coldest yet iciest weather that makes it the perfect atmosphere throughout the entire album.

Josh’s trumpet takes you those areas as if he along with Jacob and Stale are following with you by going to those locations that are at times stirring, warm, and shivering throughout the 11 compositions that are on the album. I like how Jacob’s guitar goes from electric to acoustic. Not only that he’s brilliant, but on the electric parts he uses his wah-wah pedals to create these isolated scenarios as Trinidad’s trumpet follows pursuit in these echoing yet haunting cavernous effect.

I can hear bits of Terje Rypdal, Robert Fripp, and Radiohead’s Jonny Greenwood in Young’s playing and I can feel my arm-hairs going up a bit when plays his improvisations and the chords that he would do along with some bits of flamenco touches on his acoustic guitar. Solberg’s drumming would set up almost like a crime scene that just happened.

He would take his kit through a crescendo fill, but turning it into some calmer effects by using his brushes to get a chance to relax from the intensive snowy vibes. There was also at one point where he would use his brush to make it sound like fire crackling from the wood to bring some of the heat that is needed inside the cottage to take a break from the cold.

In November is an interesting release from Joshua Trinidad. RareNoiseRecords have never disappointed me with some of the releases this year. It took me a few listens to appreciate Trinidad’s work, and while I’m not crazy about it, Joshua has come a long way. If you admire the electric fusion-era of Miles Davis from the late ‘60s and early ‘70s and Terje Rypdal, this is a powerful and haunting release that you might want to sink your teeth into.

Posted by znathanson at 8:15 AM