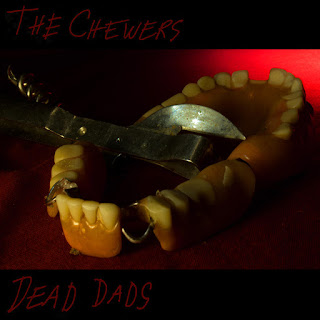 When I first heard The Chewers back in 2013 with their second album, Chuckie Change and Also, I wasn’t quite sure what to make of it since I have a love of Avant-Rock, Post-Punk, and Chamber Music from the essence of Faust, Zappa, Beefheart, and a dosage of early Devo to come in. After a few listens, I fell in love with it. Because this was a strange combination between the deadpan humor, oddball experimental music, and a dosage of the Krautrock thrown in.

This year, the duo are back again with the release of their new album Dead Dads. The reason it’s called that is because The Chewers fathers of both Travis and Michael’s father have both passed away. So this album is more complex, off-the-wall, ominous rhythms that come out of the painting to give the listeners a big reality check of what’s really happening in the world today and where it’s heading.

While there are 20 compositions that both Travis and Michael wrote, the enduring eleven highlights on the albums have really shown how much they are taking it up a notch. The enthralling guitar improvisations for Leaky Boat, shows it enthralling mind-boggling technique in the essence between Frank Zappa and Phil Manzanera while the synths goes haywire of the snarling chaotic sounds of the human flesh with spoken words between It Must Be Fresh and the chugging rhythm punk sounds of echoing vocals with Misanthropic Bones.

The Chewers show their love again of Krautrock’s finest of the Avant-Garde, Faust. With Cyclicism, it almost reminded me of the pounding rhythms and the thumping kegs and in a mid-tempo tone of It’s a Rainy Day Sunshine Girl. And they want to carry the experimental packages also with Bees Buzz.  It is a post-punk experimental reminiscent of the Hardcore Devo sessions from ’74 as the opening track shows the humor in a dark/twisted way on commerciality of It’s All the Rage.

It gives the shrieking insanity of the developments for a terrifying insane wake-up call as if we, the listener, are given a sermon inside the asylum of what has gone wrong with the trends that is happening today. Politics gives it an electronic avant-chamber punch take on how our President of the United States of America is doing a really bad job since coming into office as ominous guitars and wailing harmonica blues feels as if it was recorded in the prisons with Rot Gut.

Guest vocalist, Johnny Dowd, appears on the album on King Cockroach. Johnny has a voice that resembles the late great Lou Reed as the track is more of a ‘50s B-movie horror of the disgusting creatures taking over the city. But the music itself has a gothic score with an electronic new wave vibe as if it was recorded back in 1980.


This is my third time listening to Dead Dads. The Chewers may not be everyone’s cup of coffee, but they have really got me going and knowing what they have done so well. It seems they have carried the torch of The Residents and knowing they will keep the fires going and seeing where the duo will go to next. Off the wall, wacky, weird, and mind-boggling, Dead Dads is a startling follow up that The Chewers have unleashed to the table.
Posted by znathanson at 10:26 PM