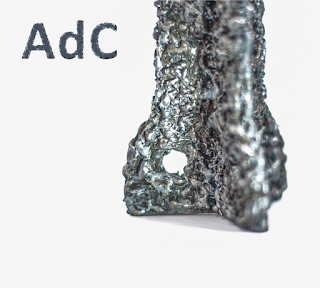 For me, I’ve been a huge fan of the Rock Progressivo Italiano since 2005 and I always wanted to see where the genre would go to next and it has landed on my lap with such amazement of a group from Bologna called, Accordo dei Contrari. Since forming fourteen years ago, the band have the elements between the Jazz Fusion and Chamber Rock with an aggressive sound. With line-up changes and having two albums up in their sleeves, the quartet has me on the edge of my seat.

That and their third album, released on the AltrOck label back in 2014, entitled AdC, is an intense jazz-avant-rock adventure into unexpected territories. The band recorded the six compositions for two days and a one day period between January 17th and the 18th and on February 15th of last year. And the result here, is a marvelous powder keg waiting to erupt at the right moment. AltrOck have scored another homerun.

Tiglath goes into the Fender Rhodes improvisation and exploring the Space Rock-Canterbury touches between Soft Machine and Ash Ra Tempel for a haunting ambient noise for the first three minutes before it ascends into the heavy guitar and drums go into a mid-tempo mode through the passages along with the melody structure of guitar and synth playing simultaneously. Seth Zeugma starts off with a dramatic and intense structure of the string section and piano before the blasting different time signatures of the rhythm section heads into place to go into the town of the city of Frank Zappa and Chamber Rock with fireworks!

Opener, Nadir is Jazz Rock with momentum. Marco Marzo Maracas is exhilarating through his guitar. Both acoustically and electrically, he go harder and softer at the same time both Jazz and Classical at the same time. As keyboardist Giovanni Parmeggiani and drummer Cristian Franchi along with bassist Daniele Piccinini, head into town for some fast-driven improvisations between each other before the last 3-minutes brings everything together.

Marco and Giovanni go into dual between guitars and keyboards as if they were Allan Holdsworth and Jon Lord and nailing it each time they hit the road which is evidential on Dandelion. When you listen to this track, you could tell how amazingly good they really are.
And it isn’t just them, but both Cristian and Daniele helping them out as a team to see where the time signature they land on, would lead them into a different area.

Giovanni moves back into the acoustic piano for an incredible concerto-like beauty that resembles Keith Emerson and Oscar Peterson combined into one before heading back into the organ and just hammering it down on his improvisations. It’s almost as if he’s switching back and forth before ending in the styles of Greenslade in a mellowing beat with Dua.


The closing track, Piu Limpida e Chiara di Ogni Impressione Vissuta, part II, is the band going into a lukewarm sunset for a string section, piano, and classical guitar. Dark, moody, and somber, it sees Accordio Dei Contrari going back into Chamber Music to give that haunting finale.

Strong, powerful, somber, and intense, Accordio Dei Contrari’s AdC is one of the finest instrumental progressive chamber jazz rock albums I’ve listened to. It shows how much they can take those elements into bringing amazement and wonders in their music.
Posted by znathanson at 9:27 PM