Procol Harum - Live in Concert with the Edmonton Symphony Orchestra 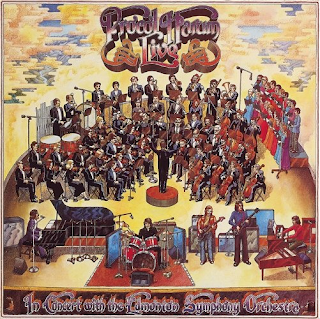 A lot of the bands in the British Invasion were often over-explained. The Beatles have been over-explained, Led Zeppelin, and the Rolling Stones were over-explained also. But Procol Harum were often at times, overlooked in the history of the British Rock scene and just known for that one song, A Whiter Shade of Pale. It was more to just that. The band had a symphonic, classical, soul, and psychedelic/progressive rock sound in their music and showed a lot of potential, power, and momentum in their sound as being the early pioneers of Progressive Rock.

That and Live in Concert with the Edmonton Symphony Orchestra, recorded at the Jubilee Auditorium on November 18, 1971 originally released on the Chrysalis (UK) / A&M (US) label in 1972. When you listen to the live album, you can close your eyes and imagine yourself at the concert whilst being in awe and blown away from the moment the stunning and thunderous version of Conquistador, you know something magical is happening with the string section and fanfare trumpets.

And the moment Gary Brooker’s voice comes in and Dave Ball’s guitar who replaced Robin Trower, it is magic. And not to mention BJ Wilson’s drumming coming like a clash of lightning. Alongside, Conquistador, the dramatic and eruptive version of Whaling Stories, the majestic beauty of A Salty Dog which it’s an amazing take between both the band and the orchestra as Gary sings the line “All hands on deck/we’ve run afloat/I’ve heard the captain cry/explore the ship/replace the cook/let no one leave alive.”

It’s an emotional beauty and make sure you have the Kleenex with you in case while the ascending orchestral take of All This and More gives Dave a chance to shine through his guitar solo as the Da Camera Singers lend a helping hand on to reach the climatic finale. Then we come to the epic that would put Procol Harum on the map of Prog, In Held ‘Twas in I.

At 19 minutes and 07 seconds, this is an excellent live take of the 17-minute suite that goes through a staggering roar from the symphony to go through the various moods. From the generous fun of ‘Twas Teatime in the Circus as the singers imagine themselves clapping and applauding of the performers going through dangerous tricks in the tent to blaring In the Autumn of my Madness from the strings and flute as it ascends to the end of the heavenly sky of the Grand Finale before the audience roars with cheers and applaud by almost giving them a standing ovation.

The three bonus tracks that was reissued back in 2009 from Salvo Records features the B-Side Luskus Delph and two rehearsal tracks that would have been a crowning achievement with the hard rocker in the style of Deep Purple meets Rare Bird with Simple Sister and climbing rhythm of Shine on Brightly. Their sixth album was a landmark and bringing symphonic rock into a whole new level that would have given Yes a run of their own money.


If anyone who wants to get into the music and history of Procol Harum, this is an excellent start to understand how much the band were ahead of their time and both Gary Brooker and Keith Reid were the Mount Rushmore of singer-songwriters in the realms of Lennon/McCartney. And in the words of Marvel’s Stan “The Man” Lee, “Face Front, True Believers! With Great Power Comes Great Responsibilty.”
Posted by znathanson at 9:44 PM