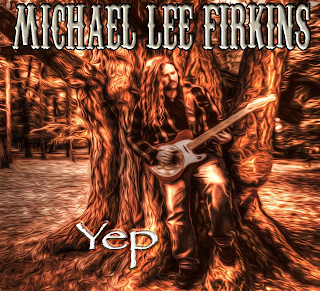 Nebraskan native and guitarist, Michael Lee Firkins has been making music since the release of his first sole self-titled debut album in 1990 and he has released six albums and has also done some guest appearances from tribute compilations for Hendrix, the Blues, and Cream, and not to mention an instructional video for Hot Licks on mastering the lead guitar. Now it’s 2013 and after an 8-year long hiatus, he’s back and better than ever.

His eight solo album released this year, simply called, Yep, fills the sound of the Blues-Southern Rock sounds along with the Roots and the Swamp Rock genres to get the flow going which is a perfect strategy. Alongside Firkins’ electrifying guitar work, he brought along some guests including Keyboardist Chuck Leavell, touring musician for the Rolling Stones and also two members from Govt Mule, Andy Hess on Bass and Matt Abts on Drums.

At first, its almost a supergroup that Firkins has brought in, but its an excellent combination of three people with a perfect sound and a perfect electricity that sets the flow on what is about to come. Opener, Golden Oldie Jam, sets the rocket for take off. It begins with Chuck doing a tribute to the late Jon Lord by doing a tribute to him on the Organ before Firkins comes with some sliding rhythms to get into the vibe.

As the song is more fun, exciting and dancing to the rhythm of the beat, a real kicking percussion workout done by Abts helps out as Leavell lays down the soul on the organ before Michael goes into Country and Bluegrass town on his guitar before going into the highway that is delivered well and each of them just having a grand old time.  And everything is fitted well at the right time at the right place for each of the members, having a blast recording, talking about music and enjoying the fun and seeing what they would do next.

Then, there’s more of the excitement. From the down south of Louisiana and the Physical Graffiti-era of Led Zeppelin flowing in of the raunchy Cajun Boogie, with its elevating rhythms and Firkins paying tribute to Jimmy Page to capture the essence of the ‘70s rock sound to get the task done right, to the ‘50s sound of the Rockabilly genre with a shuffling groove about success and sensation on Standing Ovation, where the 12-bar sound of going back to both New Orleans and Memphis that makes you feel right at home.

He also gets into a soulful ballad dealing with lying and knowing that it isn’t easy trying to keep a low profile on Long Day. Firkins gives Chuck his chance to shine with Organ and the Piano as he does some laid-back beauty and comes with some soaring results that is emotional and uplifting. (And you can imagine this being performed in a Church and learning what right is right and what’s wrong is wrong)

Elsewhere, Wearin’ Black, is a Country Waltz that has a lot of strength and vitality and you can imagine this being performed in the bar and just giving the audience a big jaw-dropping moment on being cool while Take Me Back is another soulful piece with an acoustic turned rockin’ attitude as the song deals with a last and final chance to bring a person back and not going back to his or her demons and getting the errors of their ways behind them. The spirit of the Rolling Stones is a kindled tribute from their days of Exile on Main St., but with a Psychedelic Bluesy kick to it on Last Call, as the two-part composition, No More Angry Man is soon going to become a live favorite.

The first part has a cool yet battering rhythm while the second part of the composition, is into the shuffling rock mode, with an eruptive yet volcanic mode and what Michael does is that he switches from the coolness into an explosive arrangement and just takes it down the road and seeing where he would take it and just hits every note.

The Cane, which closes the album off, is done in the style of Blues Saraceno. With Matt Abts thumping sound to get the tempo right on the drums, sliding fuzztone guitar licks and Firkins singing through an echo phase in the song, is a haunting and beautiful. And can he really take it up a notch or what? He takes his instrument through various motions and goes through the frets that is an alarming motion to give the guitar a huge wake-up call.

Hypnotic, beautiful, emotional, and raw, Michael Lee Firkins delivers with an amazingly handshake to let the listener know, he’s back and he’s going to give the voltage, a huge run by taking it with him, no matter where goes. Yep is a warm welcoming and return for Firkins.
Posted by znathanson at 4:14 AM