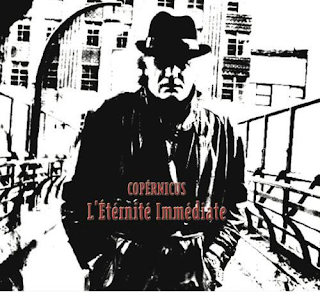 One of the most interesting artists that I’ve been discovering is a man named Copernicus (Joseph Smalkowski). What he does is go through a sermon as he speaks like a poet in the styles of Allen Ginsburg, William Burroughs, and at times, Jack Kerouac. And after hearing Worthless, I was completely transported into another world and his styles of Avant-Garde, Jazz, and at times the Progressive genre, he would grab the three musical sounds and makes this mad, bizarre, and unexpected adventure that would be sudden movement.

His new album, L’Eternite Immedite (Immediate Eternity), in which he has been doing this conceptual piece back in 2001 and he has done this composition, in English and in Spanish. This time, he’s doing this in French. So after a few listens, I knew that he is soon going to become one of my favorite artist. Not to mention seven centerpieces that will get you ready for Copernicus’ adventures.

Poudre is done in the style of Santana’s Soul Sacrifice as Copernicus goes through this sermon that he shouts and speaks while the instruments go through a driven fusion-sque attack thanks to the energetic sounds from Guitarist Cesar Aragundi and drummer Juan Carlos Zuniga Lopez.

Elsewhere, Libre De Moi, begins with a Gershwin-like piano introduction done by Newton Velasquez as he is doing this tribute to the composer as Aragundi goes into an alarming void on his guitar before the mellowing beat comes in full swing while the ominous Reves En Ballons, is a nod to the early ‘70s of French progressive rock group, Ange for a tribute to them.

Sent L’Inexistence is a trip into the outer limits as Copernicus creates this ambient and cavernous atmosphere on the synthesizers as he takes us into the voyages of space into the Milky Way before guest artist Matty Fillou’s sax comes in for a jazzy experience. Then, all of a sudden, one track that goes for 10-minutes, brings a fine touch of Can’s Monster Movie-era with Le Baton as he speaking in the style of Malcolm Mooney as Il N’Y A Pas Difference goes into a Waltz-like orientation in ¾.

But it’s the closing track, Vive Le Nouveau! That is a piece for the spaceship to head back home to Earth for a relaxation on this Avant-Rock finale. Beginning with a banging gong, bass workout by Freddy Auz, percussion hypnotism, Copernicus just nails it as the instruments just takes into uncharted results as Cesar’s guitar work sends it up into a psych-rock experience while Freddy just gives it the Fusion touches on his bass by helping the others out while Juan Lopez challenges Keith Tippett on the piano for a twisted and insane result as the band go into the styles of Aphrodite’s Child and King Crimson’s Lizard-era.

It is insane, mad, hypnotic, and beautiful at the same time for Copernicus to unleash another version of the Immediate Eternity sung in a different language and its  something to expect from the mind of Joseph Smalkowski, and you never know what he would come with next.
Posted by znathanson at 9:44 AM