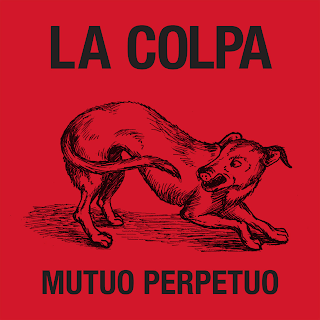 So, what do we have here? The sound on this EP has this twisted combination of Thrash Metal mixed in with Alternative Rock and Hardcore Punk rolled up into one. And let me just say that the three ingredients of the genres, work well together and the Italian group, La Colpa, are one of the most explosive yet exhilarating bands to come out of the Italian Rock scene of the 21st century. And while this is their debut EP, they have a long way to go.

With five compositions and a cover of a blood-red background featuring a dog getting ready to attack his tail, you know something adventurous is about to happen the moment you put your headphones on for a loud and roller-coaster ride you are about to embark on. The band considers Marco Muscara on Lead Vocals, Salvatore Gabrieli on Guitar, Matteo Cogo on Bass, and Luca Cometti on Drums. With a high voltage rumbling bolts coming out of the walls, you have to understand how they really pull it off and would the crowd go into a mosh pit with sweat all over them for an exciting moment in their lives.

The fuzz harder bass lines, guitar riffs, and pummeling drum work and vocals on the tracks that is the sound and concept of La Colpa’s music, shows how they can go into various rocking movements to get you going. The opening title track which starts off as a soundtrack to the El Mariachi trilogy with a guitar riff, machine gun drum exercise, and metallic bass lines. Not to mention Marco’s soft and shouting vocalization with a measure from Matteo and Luca creating tension between their instruments that is like a flaming fire getting ready to explode is electrifying!

La Dittatura Degli Anestesisti (The Dictator of Anaesthetists) opens with Salvatore’s guitar going into a haywire mode as Matteo and Luca go into some punk-like improve, and then goes into an accelerating mode as it deals with what has gone wrong with the world with war, violence, and the dictators taking over to prevent Peace happening. It’s a strong political subject, but they nailed it to show how disturbing and terrifying it is.

Il Nostro Passo (Our Pitch) sounds like something straight out of The Offspring’s Ixnay on the Hombre sessions, but with an attitude as it goes from soft guitar chords and then goes into a powder keg to burst into stirring results. Piano Biblico Di Salvezza (Biblical Plan of Salvation) is thrash punk like no other as they mixed in the Garage Rock vibe in the midsection by paying homage to Count Five’s Psychotic Reaction intro with a heavier reaction.


Then the closer, L’Impero (The Empire) goes into chaotic mode. As the instruments go into town as they sound like a speeding train to get into a full chugging sound for a fast-driven finale that is ready for action to get you pumped up and not to mention a thunderous Guitar roaring closer before Marco screams his vocals to close it off with a bang. There are some amazing music to come out of Europe whether its Rock, Punk, Metal, or Thrash, Mutuo Perpetuo (Mortgage Perpetual) is a thrilling and explosive debut to come out.
Posted by znathanson at 11:20 PM