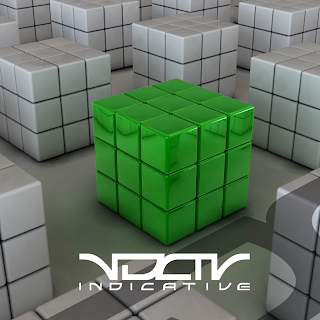 A layered, laid-back, nightmarish, avant-garde, and a post-rock adventure has made it so strong and powerful, welcome Italian’s four piece group, Indicative whose sole self-titled debut album goes through various improvisations into uncharted territories without knowing where the pieces of the puzzles fit in exactly at the right moment, at the right time. Following in the footsteps of Tool, King Crimson, Mogwai, and bits of Norway’s own Elephant9 flowing here and there, this instrumental album is loud, crazy, and out of this world from beginning, middle, and end.

The tension dualistic between guitarist Salvatore Gabrieli and bassist Matteo Cogo is a shattering tour de force while drummer Luca Cometti comes up with these wonderful drum improvisations that sound like rapid gunfire coming out of nowhere as he pays homage to Bill Bruford and Martin Bulloch as they go through various homages to King Crimson’s Red and Mogwai’s The Hawk is Howling combined into one by making it a knock-out like no other.

It’s this type of genre that is as I’ve mentioned before, nightmarish and terrifying of imagining it as if could have been used for a David Lynch film or series in the realms of Lost Highway, Inland Empire, or the cult classic short-lived series, Twin Peaks, set with a dramatic score to set the tension and atmosphere on what will happen next to the character.  But, the great thing about this, they go into different direction with different time signatures and not to mention some waltzy movements that can give you the surprise doom treatment.

There are at times, Droning and Musique-Concrete experimentation's which is evidential on the 20-minute piece, St. Anthony’s Fire that the band go through a metallic piece for the first nine minutes of the piece with some wildly beauty before the looping of backward tapes, alarming-like keyboard sounds that shows they can take it up a notch as if they had recorded this in the subway tunnels and made this as if it was a dystopian universe in the realms of George Orwell’s 1984 and the Beatles Revolution 9.  I have listened to Indicative’s debut about three times already and it’s an exhilarating debut for the band to bring out to the table.


Is it easy to listen to? No. But with a cosmic and extremely alarming value, to come at you out of nowhere, they really are something. And again, it well worth use for Lynch’s film work to set the tone on how they are worth the band to explore if you’re a fan of: Prog Metal, Ambient Music, and the Post-Rock genre. A must listen to album from start to finish.
Posted by znathanson at 10:56 PM