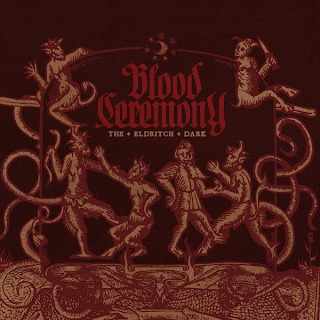 Blood Ceremony has really been receiving word of mouth and an underground following since their formation back seven years ago in their hometown in Toronto, Canada. The quartet take a lot of inspirations from the realms of Doom Metal, Acid Folk, and Prog/Psych Rock rolled up into their sleeves with the sounds of Jethro Tull, Black Sabbath, early Pink Floyd, and Comus. That and their follow up to Living with the Ancients, The Eldritch Dark, is one of the most heart-stopping yet explosive albums to get you ready for the next big step in Blood Ceremony’s career.

It is a knock-out from their first two albums and they capture the essence of the story-telling fairy tales in a gothic setting and black magic atmosphere as well to show that they have never given up on that and they have not reach a stop sign for it. Alia O’Brien is still mesmerizing with her vocals and can sing very well and adds the haunting touches with her flute and spooky surroundings on the organ while guitarist Sean Kennedy, brings the acoustic and electric vibes of the late ‘60s and the golden-era of the 1970s.

Songs like Goodbye Gemini, which begins with a flute/jazzy bass intro before it segues into heavy riff and rumbling chord lines as it reminisces the Pretty Things S.F. Sorrow-era and they really pay homage to the band to pay tribute while Lord Summerisle has this doomy acid folk duo between Lucas Gadke and O’Brien as the guitar goes through an echo chamber before going into a lukewarm crisp rhythm and the flute goes into a spiritual guidance. Opener, Witchwood has this rising to Organ-driven roar and a laid-back stoner bluesy rock feel to get the seat belts buckled up for an exhilarating roller-coaster ride as they go into town to start their engines up.

Ballad of the Weird Sisters sees them back into their folk-rock doom surroundings as the violin comes in as a tribute to Graham Smith of String Driven Thing a-la The Machine That Cried-era before the flute solo and then the laid-back grooves come kicking in to get you into the mood. The title track shows the band in their nightmarish psych powers with the metallic phrases in there as O’Brien’s vocals become Ozzy during his Sabbath Bloody Sabbath period and she can nail the high harmonies well as it goes straight into a Militant Rock format before getting back into the catchy climatic flute/guitar line finale.

The relaxation comes kicking in on Drawing Down the Moon. Beginning with a Bass/Organ intro then Kennedy’s guitar structures of Martin Barre and Tony Iommi and Alia comes back in shining with her vocals and taking her organ in the realms of the late Jon Lord and Keith Emerson lines that makes it an excellent combination to have the band a grand old time. Faunus is a stunning instrumental done by booming guitar and flute solo and drum patterns along with thumping laid-back bass lines before the 8-minute epic, The Magician.

Its based on the book by W. Somerset Maugham and the character Oliver Haddo (Alister Crowley’s alias name), in which he appeared in the previous album, Living with the Ancients, sees the band go into the Mini Rock Opera format.  And it’s a powerful storytelling to understand who the real Alister Crowley really was in his day as an occult and a poet. The music goes through various forms into a heavy rock format into a Prog-Organ finale as if they had done the score for Tim Burton’s Batman and the dystopian world of Gotham City.


This is one hell of an album from start to finish and it proves that Blood Ceremony show that they have come a long way. So if you fancy the Occult Rock sound, and Prog-Doom Metal structures, this is the right album at the right time. Rise Above Records/Metal Blade have scored a knock-out and they really got a band that are going to bring more to the table in the future!
Posted by znathanson at 9:53 PM