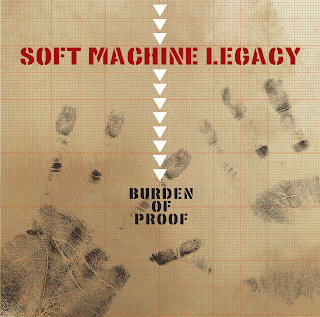 The sounds of British Jazz Rock, just makes you feel comfortable and make you sit down to relax, calm yourself, and feel the coolness to relieve the stress. And at times it feels like the soundtrack to your life or makes you go into a Jazz club in the streets of England or in New York to catch some of the old and new guards of the genre and it is quite obvious that something twisted and inconceivable that will take the audience and listeners by surprise.

Since their formation in 2004, Soft Machine Legacy has been carrying the sound and the remembrance of the band’s music and staying true to the Machine’s music like a tidal wave that is waiting to happen. The band considers John Etheridge on Guitar, Theo Travis who replaced the late Elton Dean on Sax, Roy Babbington on Bass, and John Marshall on Drums. The group released five albums (two which are studio and three are live) and their new album, Burden of Proof, is like a time back into the early 1970s and it’s an exuberant exploration from the moment you put it on from start to finish.

They go through various observations from the Canterbury movement, Free Jazz, Ambient, and the sound of the Blues to make you get ready for the jump to light speed at any second. The opening title track which starts off with Theo Travis creating some mysterious passages on the Rhodes before the band comes into the full gear with Roy’s walking bass line, John’s soothing drum patterns, and Theo and Etheridge playing together on the melody that makes it a wowing experience that you just never expect to do something that is magical.

The soothing and haunting touches on Kitto, provides John Etheridge’s chance to shine with a bit of the middle-eastern scenery on his guitar as he goes through various passages that is at times classical and cryptic at the same time as it almost could have been recorded at a dark and cavernous palace along with the spacey Voyage Beyond Seven while the in-your-face attitude of Pie Chart lets the band have an enjoying moment. Here, Etheridge and Travis go into this competition between guitar and keyboards as they would decide which was better and they hammer it like no other.

Everything becomes this Avant-Garde madness with the percussion as Marshall goes over the place with the drums and different instruments to become this nightmare on JSP as it segues into a Psychedelic trance on Kings and Queens. On the track, there are touches of early Pink Floyd, Arthur Brown’s Kingdom Come and the Third-era to go along with it. Featuring spooky organ work, Roy’s eerie bass line, and arrangement helps them with surrealism as the flute and guitar just makes it, poignant.

Meanwhile, everything becomes this chaotic homage to the Rock in Opposition scene with the time-changing upbeat tempo into a haywire mass madness on Fallout while the band give a chance for Roy Babbington to have free rein with Etheridge helping out as Roy goes into various bass chords on Going Somewhere Canorous? The relaxation on Black and Crimson and They Landed on a Hill provides a moment for some quiet time between the band members. There is something very strange and almost dreamy at the same time when they go into this atmospheric beauty and as they settle down it is almost like a candle burning bright into the darkness.

The frenzied and wildly madness on the Free Jazz experiment The Brief is John Marshall and Theo Travis go into this fast-driven pound cake between Sax and Drums as each of them channel John Coltrane and Elvin Jones while the bring in the Funk and with a dosage of Zeppelin in there on the impressive vibes on Pump Room. Then it’s back into the Chaotic structures of the Avant-Garde movements into another haywire effect, but its Etheridge going into a mind-blowing guitar work by going all over the frets and just taking it up a notch by paying tribute to Zappa on Green Cubes.

Burden of Proof is an excellent and eruptive Jazz-Rock album that Soft Machine Legacy has unleashed.  And they are something I might look into during this year and Moonjune Records have scored another home run.
Posted by znathanson at 5:05 PM