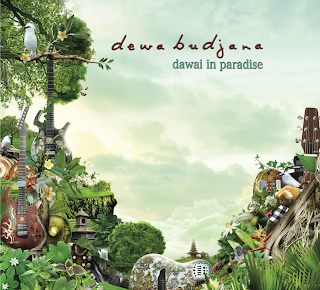 Indonesian guitarist Dewa Budjana is soon going to hit the Jazz-Rock scene like no other. He has been around in the Jazz scene since the ‘90s and there is no one there to stop him. His fifth solo album, Dawai in Paradise, released by the good people at Moonjune Records, is a spiritual retreat and calm-like guitar instrumental album that is very atmospheric, ambient, rock, psych, pop, and will take you to different universes that you haven’t seen before with his work, progression, and solo styles that will have your jaws dropped from beginning, middle, right until the very end.

Compositions like Back Home in which it has this lukewarm beauty with some electronics, sitar, and a exercising bass work done by the late Dave Carpenter as Dewa challenges Steve Hackett as if it was 1973 all over again to pay tribute to the Selling England By the Pound-era of Genesis for the last few minutes as Indra Lesmana does his Tony Banks synth work to stay true to the vision of the Prog sound. Then there’s the opener, Lalu Lintas in which it goes into the Gentle Giant-like intro before it kicks into full gear of a full throttle Fusion-Swing-Metallic resemblance that comes out of nowhere to give it the Funky flavor and not to mention a nice homage to Frank Zappa and Brian May.

On Masa Kecil, it’s has this Middle-Eastern flavor as the Electric Sitar comes in handy for a moving and uplifting piece as he goes through various improvisations while the band members just fly into the soaring sky with the directions that Dewa wants the band members to go into some laid-back motions of the driven beats. Elsewhere, he’s back into the full time-signature Swinging Jazz turned moving sounds with the electronic groove into the mix with Kromatik Lagi as the bass line becomes walking dance beat as the drums take a wonderful moving river flowing sound.

Meanwhile on Malacca Bay, Ade Irawan does this George Gershwin concerto introduction on the Piano before it becomes an acoustic classical walking dance move as this female vocalization comes to create some mythic and haunting touches to the piece while Caka 1922 has this emotional and soothing classical beauty that is an homage to Albinoni’s Adagio in G minor featuring some beautiful strings and cello to set the tone and scenery of that era.

Then, everything becomes calm after the storm with a Folk-like sound with an Asian Electronic beat to the mix as Indra Lesmana creates some perfect touches on his keyboard and synth as Dewa helps him out with the melody to On The Way Home as he goes back again into the swinging free-jazz rock sound with a mellowing beat on Dancing Tears before it becomes some crazy funk-vibe settings as Indra challenges Keith Emerson with his piano work.

I have listened to Dawai in Paradise about three times now, and it’s a real treat of hearing some of the recordings he did thirteen years ago and its almost a trip through memory lane for Dewa to cherish and relive those sessions. This is perhaps one of the best Jazz-Rock/Fusion albums I have enjoyed listening to and Moonjune have scored a home run with this and I can’t wait to see what the label will have up their sleeves.
Posted by znathanson at 1:00 AM