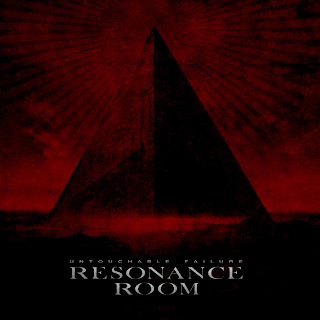 Much like their inspirations from the sounds of; Pain of Salvation, Porcupine Tree, Katatonia, and Opeth, up-and-coming band Resonance Room are one of the newest bands to come out of the Prog Metal scene in Italy.  With a dosage of Gothic and Doom rolled up into one as well as a nightmarish view of what the world has become, Untouchable Failure is an opus dealing with emotional, sonorities and feelings of decadent and suffering a mental breakdown like no other.

The band considers Alessando Consoli on lead vocals, Riccardo Failla on guitar, Alfio Timoniere on bass, and Sando Galati on drums.  While they follow into the footsteps of the bands they grew up listening to, the music itself is passionate, emotional, powerful, and staggering. Opener, The Great Insomnia begins with a thunderous roaring eruption as it represents the Crack the Skye-era of Mastodon by paying homage to the group while No Precious is touching piece starting with a grand piano intro before seguing into an harder ballad as Failla creates some mysterious passages on his guitar as Alessandro just nails it on his vocals as if Mikael Akerfeldt is watching in awe.

There’s also the doomier side of Resonance Room.  The terrifying Outside the Maze, grows like a flaming fire burning bright with punches of Tool’s Lateralus-era as Alessandro pays homage to Maynard James Keenan on his voice as the band go through vicious touches into a soothing movement before going into a soaring piece with a symphonic touch that will have your jaws dropped as Naivety and Oblivion grows like a rapid machine gun.

Riccardo just makes his guitar sweat bullets by firing on the rhythm and lead and where his fingers go on the riffs as Galati helps him reload on the drums with a rapid beat while Aleesandro goes through soft into a growling moment as they keep going to work as a team before going into a spacey atmospheric turned Power Metal finale. The nightmare continues on with the thrashing and in-your-face attitude of Unending Loss.

It goes into this pummeling drum work that is like a train going 600 miles per hour chugging and then moves from a tear-dropping movement that Alessandro is almost fighting back tears singing this piece before getting back into the Thrash Metal sound that closes with a dead silence. The gentle acoustic rocker, Prometheus, sees the band going into a quiet mode for a chance to relax and calm down by going into a soaring ballad featuring keyboard strings, jazzy meets classical bass lines that Timoniere brings to the table.

Resonance Room hopefully is soon going to be one of the most amazing Prog-Gothic-Metal bands to come out of Italy. Untouchable Failure is one hell of an album from start to finish and it’s almost the soundtrack to a sci-fi film for the 21st century with a provocative touch. Let’s hope they get some recognition in the Metal community and the festivals as well in the years to come in the future.
Posted by znathanson at 10:29 PM