The Minstrel's Ghost - The Road to Avalon 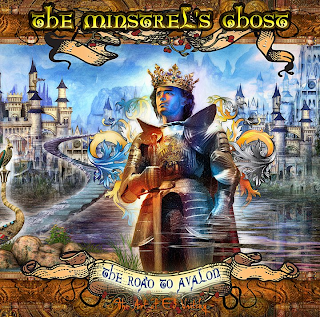 By now you’re probably familiar with the story of King Arthur and the Knights of the Round Table. Back in 1975, Yes Keyboardist, Rick Wakeman recorded the album and then took it to the Wembley Arena and performed the entire album with an orchestra and band, and players of the characters on Ice! It is considered laughable, ahead of its time, and pushing the prog genre a bit further into the deep end, but you can tell that Rick was taking a huge leap for it. This year however, there’s this new up-and-coming band formed by Blake Carpenter called, The Minstrel’s Ghost, and their second album, The Road to Avalon, serves as a welcoming hand-shake of telling the true story of King Arthur.

The Minstrel’s Ghost is a supergroup that features Blake himself on lead vocals, keyboards, and guitar, Colin Tench (BunChakeze and Corvus Stone) on Guitar, Marco Chiappini (Gandalf’s Project) on Keyboards, Troy James Martin (Loren Dirks) on Bass, and Zoltan Csorsz Jr (The Flower Kings) on Drums. Done in two compositions for 31 and 29-minute-epics, this makes it a wonderful storytelling and adventurous complex the way it was meant to be and years in the making of an extraordinary project from beginning to end.

It begins with Part One – The Design with the swooshing synthesizers that Mario introduces on The Avalon Overture that sets the tone for an introduction between moog and the mellotron before Colin goes into his spine-tingling electric guitar and acoustic rhythm sound to have more of a folky atmosphere in the styles of Steve Hackett as he helps Marco out to give him a hand while Avalon (Part 1) in which Blake sings so perfectly, has this haunting and touching melody that is evidential throughout. It goes through the virtuoso guitar work, layered drum beats that Zoltan does that will take you by surprise.

Merlin represents a mellowing Renaissance Rock story-tale piece about the wizard who trains and helps young King Arthur, which has some Folky elements as it segues into Lady of the Lake. The fourth piece shows a huge inspiration in the styles of the earlier incarnations of PFM (Premiata Forneria Marconi) and Styx as Excalibur, drifts into a jazzy moog exercise with an atmospheric lullaby as it closes Act One with the second part of Avalon that Marco, Colin, and Zoltan cools the scenery as Blake tells the listener this is what just happened to King Arthur and the characters to help his rise to be the true born of King of all Britain.

The second act, The Life, gets even better. It begins again with the streets in the crowd and a shout of welcoming the people of England to Camelot with a roaring of applause as Zoltan does his homage to Buddy Rich before the band goes into full gear of a sweeping adaption revival of symphonic rock as A Love Betrayed gives Colin a moment to go into an atmospheric Floyd-sque introduction before going into the dramatic and moving sounds of anger and hatred in the touches of A Momentary Lapse of Reason.

Full throttle rumbling guitar chords come at you with a bang as The Minstrel’s Ghost pay homage to the Power Metal scene in the ‘80s on The Son as the battle comes in full swing with swords clashing in a battle to see who would win to save England once again. Meanwhile, the third part of Avalon, is an instrumental styles of the previous third track that sets the tension and the mood after the bloody aftermath for the fighting and sword-slashing as Le Morte d’Arthur (The Death of Arthur) features some classical emotional touches of Arthur’s brave fight for justice after Mordred gives a powerful blow to the head as the closer, The End, draws the curtain down with a prog-tastic finale between guitar, bass, drums, keyboards, and Blake’s vocalization on remembering the true born king of Britain.

While this was a huge project in the works and Blake’s vision and story of King Arthur, The Minstrel’s Ghost idea of a concept album shows that while they are on the yellow brick road to take the Prog genre into a different level, its probably going to become one of the most fascinating stories told by a band who know and embrace it like a flaming butterfly.
Posted by znathanson at 6:47 PM