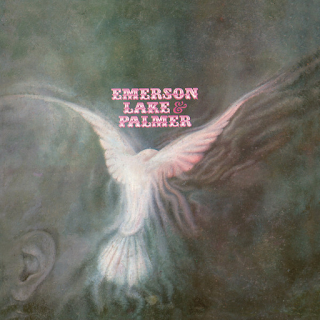 The original Progressive Rock supergroup, ELP (Emerson, Lake and Palmer) are considered one of the true influential bands to come out of the golden-era of the 1970s that were loved by fans and hated by critics. There’s a touch of Pomp and Circumstance, Jazz, Classical, Raw, and a gigantic eruption that will hit you right in the face with a big gigantic slap that could echo the Mountains at the Grand Canyon. You have the power rockin’ keyboard maestro and wizardy of Keith Emerson, the soft and smooth voice and playing both bass and guitar of Greg Lake, and the thumping and fast-speeding drumming and the Billy Cobham sounds of Carl Palmer.

Both of these members came from different bands including King Crimson, The Crazy World of Arthur Brown, and The Nice, and what this trio did was they pushed the envelope and not only they brought magic to the table, but what they did was something special and beyond what the locked door what was headed for them. That and their first album released in a Deluxe Edition format this year, features both the original mixes and the remix format that Steven Wilson of Porcupine Tree has done.

Their first sole self-titled debut album, originally released on the Island label back in 1970, shows the electricity, explosive, and daring debuts to come out as if the Gods has woken up and sent thunderbolts to attack the Roman Empire that was straight out of the original 1981 classic, Clash of the Titans. Starting off is the Hard-Classical-Heavy Metal opener of Bartok’s take of The Barbarian, is a perfect starter to kick the album off with a bang. Featuring Fuzz-Tone Bass, Organ, Brubeck meets Monk-like Piano work in the bridge, and virtuoso drum work, this is a high voltage roaring beast.

The 12-minute piece, Take a Pebble, is Greg’s moment to shine while it goes through this Jazzy ballad that is romantic and tender while the midsection goes into this Country-Folk dance instrumental between acoustic guitar hand-clapping rhythm that makes it very interesting and odd at the same time and then goes back into the closing finale that makes it a perfect climatic piece. Then, we come to the roller-coaster swooping adventure ride on, Knife-Edge, which is based on Leos Janacek’s 1926 composition, Sinfonietta.

This is where everything becomes like a film score. The result is Keith Emerson’s keyboard and piano work on the instrumental suite, The Three Fates. Its based on the Greek mythology of the Sisters, in which one of them was the daughter of Zeus; one who killed the Typhon with a poison fruit, the second gives instructions to make their soul eternal, and the third is considered the daughter of the night. Clotho starts off with the Royal Church Organ as a haunting fanfare with a booming sound while Lachesis goes into the George Gershwin Rhapsody in Blue-era dooming stylization as Keith pays tribute to the composer with his classical piano work like a madman as Atropos is where everything comes together as it goes into a thumping Gershwin Rockin out closer with Drums and Piano and clashing at the end until the sound of an explosion hits the end.

Tank is Carl Palmer’s composition and while Emerson and Lake go to town with him a-la Jazz Fusion style, Carl takes himself on center stage with a thunderous drum solo that again resembles Billy Cobham, Keith Moon, John Bonham, and Bill Bruford, he takes the moment to shine of making it sound like a machine gun that sounds like it has been shot 600 times at 100 miles per hour and he gives you the bullets to say, “Ramming Speed!” Then it’s the closer, Lucky Man, that give Greg Lake to come back for a calm after the storm.

It’s a touching and heartfelt ballad and at times folky with a Medieval theme, not to mention an Electric Guitar solo in the bridge and Keith Emerson swooshing synth solo that closes the album off with the curtain dropping and the audience applauding like crazy and having a hit on the radio with it as well. The bonus tracks which feature the 2012 Remix of the pieces that Wilson has done, deliver some amazing quantity.

There’s the extended outro on Knife-Edge, in which it features a resemblance of The Nice’s Rondo with Emerson attacking the organ like an alarm siren while an earlier studio version of Mussorgsky’s vocal version of Promenade which would later be released on the live album of Pictures at an Exhibition, is quite interesting on where the band would take the classical piece to a higher level as Rave Up is a tribute and an homage to the Jimi Hendrix Experience with a Funky Attitude as Greg comes up with some acid wah-wah guitar solo as Keith goes into the style of Bo Hansson and Carl just stays with the beat and you can hear some of the earliest sounds of Tarkus in there as well.

Steven himself has become a very busy man working on the Crimson catalog, Tull, Caravan, and now ELP, the remixes are amazing and fun to hear the way that it was meant to be. I bet it was very busy finding the original analog tapes and see what was left off the kitchen sink during the sessions and the improvement is amazing and Wilson himself deserves a pat on the back.

In the Liner Notes done by Chris Welch, who was a supporter of the band, and writer of the Melody Maker in its hey-day of the late '60s and early '70s, and helping with the Rare Obscure Prog gems for the Repertoire label, mentions it gave the audience a chance to understand who they really are: "They expected much of audiences and gave them plenty to think about. Yet their ongoing programme of wildly different musical themes and genres was always an emotional and exhilarating experience."
Posted by znathanson at 9:36 AM