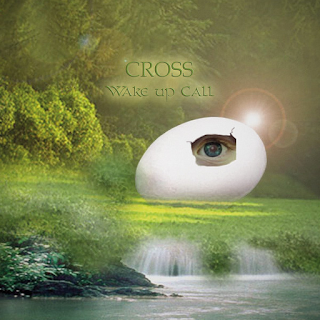 Setting in the universe of Science-Fiction and Fantasy atmosphere and with a dosage of the Neo-Prog scene to go along with it, Sweden’s own Cross have taken a dramatic and symphonic approach to their music of the genre and shown how it is done correctly. Since their formation in the late ‘80s and their 11th album, Wake Up Call, has a very surprise influential sound in the Prog universe and following in the footsteps of; Marillion, Yes, Kansas, and the keyboard-era of Rush from the Grace Under Pressure-era that would have made four of those bands be taken aback from what they are hearing from beginning, middle, and right into the end.

Mind you, this is my first time reviewing this band’s music and let me start off by saying how amazing and spell-bounding it sounds from a band that knows the score and takes it up a notch. And while I’m not crazy about the Neo-Prog scene, Cross’s music is beyond your wildest imagination that is almost like going on a fabulous and fantastic magic carpet ride into another dimension that is out of this world and straight out of the ill-fated TV series, Firefly.

Opening 8-minute epic, Human Resolution sets a spectacular roller-coaster ride featuring some dramatic guitar work, punchy and mellowing keyboards, and Hansi Cross, the man behind the band and the boss man behind the independent label, Progress Records, comes into full swing. At times it sounds like a Video Game score for the Nintendo classic, The Legend of Zelda, but it really makes you aware that this band knows what they are bringing into the table with some ingredients to come up with a fabulous potion to make some excellent music.

As the homage to Steve Hackett’s classical guitar playing on the short intermezzo Remembrance, it segues into the thrilling 11-minute piece, Falling Beyond that features swooshing moog synthesizers, strings, bass, drums, and guitar work that shows the band falling under the spell of the ‘70s Prog sounds of not just Genesis, but a combination between a symphonic version of King Crimson meeting a darker version of Premiata Forneria Marconi, and of course I’ve mentioned before, the mid ‘80s keyboard-era of Rush during the Grace Under Pressure-era.

Racing Spirits sees the band go into a militant introduction before Hansi lays some virtuoso guitar playing as Tomas Niort does some excellent drumming improvisation in the styles of Neil Peart and some more of the keyboard work that has some of the spooky passages as bassist Lollo Andersson creates some thunderous bass lines that reminded me of Geddy Lee, Chris Squire, and Stanley Clarke that is beyond the fusion thunder dome.

Meanwhile, the 17-minute epic, Waking Up, sees Cross going into more of an atmospheric keyboard layered sound before going into some adventuring and exciting uncharted territories of an evil fanfare before kicking off into full gear. Notice that the guitar solo sets the mood of life-form creatures coming into our world to start a new life and a new beginning and what will hold for the future for them while it goes into a militant sound again as Hansi’s voice and the violin solo that Hannah Sundkvist does is moving and make it very exciting and in your face.

The last track, which is a bonus track, another epic, Now, which was originally going to be sung back in the early 2000s, but when the terrorist attack that occurred on 9/11, everything changed, and canceled the piece and gave it to another of Hansi’s projects called, Spektrum. Cross has recorded it and it is very touching and yet orchestral to give it that tight adventurous ride back home to Earth. And it’s a glorious, yet spiritual journey on staying alive and finding out who the real you is.

Wake Up Call is an excellent symphonic prog-ride into the outer limits that shows that Cross can really be something quite extraordinary and one of the finest albums to come out of from the Neo-Prog band and it really has something to give a special treat to all. Not to mention the great album artwork done by Tonny Larsen which shows I imagine a love of Science-Fiction artwork and an homage to H.G. Wells for inspiration.
Posted by znathanson at 11:12 PM