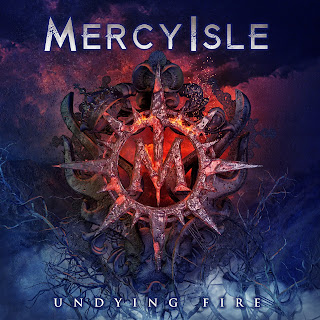 It’s been seven years since I’ve done a review on a Female-fronted Symphonic Metal band that would make my ears perk up. Whether it would be early Within Temptation, Amberian Dawn, Stream of Passion, Ancient Bards, Edenbridge, Delain, After Forever, or Tarja’s debut album My Winter Storm. I still haven’t forgotten about these bands and writing a review on some of the albums can be hard or tricky and various listens I would sometimes buy their music on The Laser’s Edge website.


Now for me, I’ve always have a soft spot of the Symphonic Metal movement when it gets a classical and roaring epic taste with an orchestral vibration from the keyboards or a real orchestra and choir in which Within Temptation used on the Black Symphony live album recorded in their home of the Netherlands at the Ahoy Arena in Rotterdam at the time they were promoting their fourth studio album, The Heart of Everything. My brain is still waiting for the right Female Symphonic Metal band…. until now.

A band that is an American-Dutch band that launched back three years ago by vocalist Kassandra Novell after having some successful performances in Belgium at the acclaimed Metal Female Voices Festival. With a few EP’s under their belt, they have released their debut album entitled, Undying Fire which was released last year in late October which coincided their European premiere at Metal Female Voices Fest XIII.

Their debut album is an eruptive volcanic explosion that made my ears ring when I turned the volume as in the words in the back cover of David Bowie’s album The Rise and Fall of Ziggy Stardust and the Spiders from Mars, “To Be Played at Maximum Volume.” And you might want to play it really, really, really loud! Stop, Kiss Me, the intro gives to mind Queen’s Son and Daughter before the guitars going into overdrive on the rhythms and riffs as Kassandra’s vocals and one of the sharing vocals delve deep on reconcile the love they had now in ruins before trying to start again.

The dynamic roaring guitars really sets the tension between the two with double guitars textures as if Arjen Anthony Lucassen was conducting both Metallica during the Kill ‘Em All-era and the British Steel-era of Judas Priest creating an orchestral finale. No One Will Save You is being trapped in your own prison and you’ve finally had knowing you will have to pay the price the vocals and Kassandra’s snarling vocals is crossover of the Beauty and the Beast.

This time, Beauty has transformed into a snarling beast and she’s not letting go. She can snarl perfectly. It’s a haunting and rising composition and the lyrics dealing with knowing that no one can help you, the character has come to a breaking point of being pushed too far. With help from Trillum’s Amanda Sommerville who was not just a producer on the album, but a vocal coach, she helps out by sharing a duet with Mercy Isle.

She and Kassandra work well together as Joop De Rooij sets this mourning piano melody with a Celtic Folk flute sound in the background dealing with how the world is now cruel and knowing that there’s no hope for peace as the song is telling it by Saying Goodbye to hope, love, peace, and joining hands without any chance that is now filled with hatred.

Kassandra brings her inner vision as if she’s Kate Bush on If I Could. It is a gentle piano, bass, and drum section filled with a thundering guitar climbing up that hill. The Celtic sounds on Jeroen Goossens’ flute and Brian May-sque licks, is a crossover as if he had produced Hounds of Love. I can imagine one day this song will be a live fan favorite for audiences to sing along while the opener Wake Up, which starts off with an alarm going off rises up to challenge both Delain’s Charlotte Wessles singing with Ritchie Blackmore’s Rainbow and After Forever.

I have listened to Mercy Isle’s Undying Fire about three times now. This is a revelation for me. Both going for my afternoon walks on a grey and blistery day and just being completely gobsmacked of how not just Kassandra but how Joop, bassist and vocalist Chad Novell, and drummer Ywe van der Pol and guests guitarist Sebas Honing worked well to give her a helping hand.

It is symphonic metal at it’s best with it’s epic roaring productions. So if you love Within Temptation, Edenbridge, After Forever, and Kate Bush, than I highly recommend you check out Mercy Isle’s Undying Isle. As Marvel’s own The Mighty Thor once said, “Waves are but water. Wind, but air. And though lightning be fire…yet it must answer thunder’s call!”
Posted by znathanson at 10:22 PM