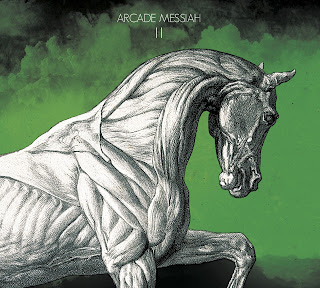 John Bassett (Kingbathmat) has never disappointed me since hearing one of his projects for the Post-Rock and Post-Metal futuristic sounds of the instrumental post-metal project, Arcade Messiah. Since hearing the debut of sole self-titled release back last year on the Sterohead Records label, Bassett brings the Messiah back into the machine again with Arcade Messiah II.  And he is starting to come full circle with the second album. And the six highlights on here, shows Bassett himself is a master.

There are nine tracks in which one of them is a bonus track in which it’s his take of Aphrodite’s Child’s The Four Horsemen, which it’s released on CD and on LP format on the Fruits de Mer Records label as a part of the 4-LP box set entitled Side Effects. The take of the classic track from 666, which clocks in at 18-minutes, has a 21st century flavor with an outer voyage spacey twist that resembles Radiohead’s The Bends-era. And the vocals carry the robotic and spooky element with the Leslie Speaker vibe to create that atmosphere.

The blaring guitars go into the harder edges and with a melodic twist that have riffs, rhythms, and improvisation between the reminiscent of Mastodon, Mike Oldfield, and Tom Newman with the Red Widow. The rising opener Moon Signal goes with a cinematic-like scores to a whole new world. It has this nightmarish intensity on the rhythm section while going into a relaxing ambient composition as it ends with sending signals to an abrupt end with Gallows Way.

Via Occulta begins with a dystopian futuristic ghost-town score in a ballad tone before seguing to head towards as they Read The Sky. It is a Progressive Post-Metal with a cross between David Bowie, Metallica, and King Crimson into a blender. The techniques are riveting and mammoth at the same time like John was bringing the incredible dynamics on the instruments as if he is the captain of the Millennium Falcon and going to get to make the jump to lightspeed.


This is my fourth and fifth time listening to the second album of Arcade Messiah. And John himself as I’ve mentioned earlier in my introduction, never disappoints me. This is the finest album that John has released. With elements of the Prog, Post-Rock, Post-Metal sounds thrown into the mix, Arcade Messiah’s II is almost as I’ve mentioned on previous albums, the soundtrack inside your head.
Posted by znathanson at 8:45 PM