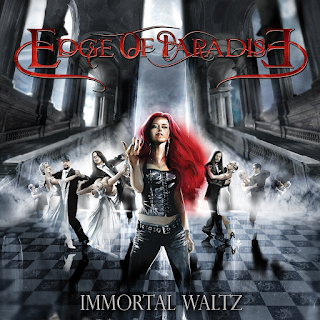 For me, I have a soft spot of the Female-fronted Metal bands in the Progressive and Symphonic sounds. Whether it’s Edenbridge, Ancient Bards, Amberian Dawn, Arven, Within Temptation, and Delain to name a few, they are my cup of coffee to show where they can take it up a notch. When I first heard Edge of Paradise, I was jaw-dropped to the floor.

This is their second album released this year on the Pure Rock Records label in which it’s their follow-up to their debut, Mask along with their debut EP, A Perfect Shade of Black. They have been around since their formation back in 2011 and have toured in the West Coast states three years ago and I hope their new album Immortal Waltz will finally get the band a lot of hope tour a lot not just in the West Coast, but everywhere to spread the word-of-mouth and recognition they deserve.

The band considers; Margarita Monet on Lead Vocals and Keyboards, David Bates on Guitars, John Chominsky on Drums, and Nick Ericson on Bass Guitar. It’s My Show is a real killer as you can imagine yourself inside the dystopian circus as Margarita being the master of ceremonies in the styles of a pleasant nightmarish experience in her vocals as if she is almost following into the footsteps of Alice Cooper.

But the title track, it is in the styles of Bigelf meets Haken in a Doom-Melodic-Symphonic Metal twist. David Bates nails it through the rhythm on his guitar and Monet herself goes into the insanity of her voice as if she is giving the listener to let her go inside the insane asylum of where the nightmare still continues. It has a Tim Burton feel of a score of the waltz section that the madness is about to begin for the demons to be burned to a crisp.

Rise for the Fallen is an increasing yet exhilarating composition. And you can find their first music video which it’s up on YouTube, is a driven turned classical momentum from the rhythm section thanks to David’s intense riffs, John’s mid-tempo drumming and Margarita going nailing it each moment from the band to see where the members are going in which direction her vocals take into.

The four tracks, (Perfect Shade of Black, Ghost, In a Dream, & Break Away) were originally on the debut EP. And there’s a bonus track in which they cover the Dio-era of Black Sabbath (Children of the Sea) is a wonderful tribute to the legend and knowing the torch of Ronnie James Dio is still influential and inspiring a lot of up-and-coming hard rock and heavy metal musicians to let him know that the spirit is flowing and ascending the legacy.


And Edge of Paradise did a spectacular take in almost a sing-along fanfare touch of the piece. But they nailed it in an orchestral way thanks to the keyboards in the string section format of an epic proportion in the right way. I have to say this, I’m very impressed of what
I’ve heard from start to finish. Edge of Paradise have got something in their music.

And whether you love it or hate it, they are soon going to be one of my favorite bands in the Metal community to show that the genre is still trucking and revving the symphonic engines! And in the words of Marvel’s Thor, “And though lightning be fire, yet it must answer thunder’s call.”
Posted by znathanson at 10:51 PM