Dust On The Nettles: A Journey Through the British Underground Folk Scene 1967-72 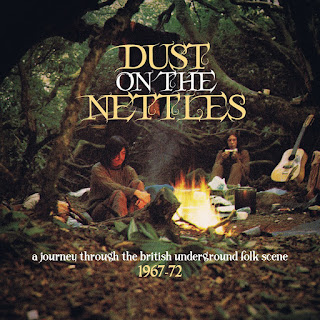 For me, I enjoyed the sub-labels that are a part of Cherry Red Records. Esoteric Recordings, RPM, and now Grapefruit Records. This year, Grapefruit have scored another home run in the world series of amazing compilations with the release of the 3-CD set entitled, Dust On The Nettles: A Journey Through the British Underground Folk Scene 1967-72. There are 63 tracks that cover the other side of the British Folk scene that carry the essence of both Psychedelic, Electric, and Acid Folk sounds and showing that it isn’t just Joan Baez, Bob Dylan, Joan Collins, and Pete Seeger.

But more of the guard of the most known and obscure bands and artists that you may or may not be familiar with, is interesting and exploring why some of them were ahead of their time. There’s also a 36-page booklet featuring liner notes and history of the underground folk groups and artists done by David Wells who has done another job well done for this amazing compilation to capture the mystery and beauty of the genre.

You have the most important figures on there including Pentangle, Fairport Convention, Steeleye Span, Joan Armatrading, and the Incredible String Band to name a few that opened the door to name a few of the Folk scene. And not to mention Tyrannosaurus Rex which would transform itself from a Folk duo in the realms of ‘70s Glam Rock that would give Marc Bolan a rise into superstardom to Ride a White Swan.

But alongside the important pioneers of the British Folk scene, there is the hidden treasures that were often overlooked and obscured in the genre that have been given about time some listening and recognition they are deserving big time. There’s Spirogyra, Trader Horne, Trees, Heron, and Dando Shaft to name a few. And the highlights throughout the box set, is interesting and worth checking out to sink your toes into the Folky oceans.

The gothic-mourning touches of Trees’ The Garden of Jane Delawney sung by Celia Humphris, just sends shivers down my spine of a dream not discovering. And for Bias Boshell’s lyrics, it’s poetic and almost as if it could have been written during the middle ages in the Renaissance period. And not to mention, the haunting beauty of the Willow’s Song done by Magnet from the 1973 cult classic, The Wicker Man while Joan Armatrading gives it an Acid Folk taste of a ballad featuring the sitar of the Visionary Mountains.

There’s also a rare recording of Steve Peregrin Took after being sacked from Tyrannosaurus Rex carrying the Folk Paean touch to Mandrax whilst recording the piece in Denmark Street at Central Sound Studio in 1969 of Amanda, makes it very interesting and Steve sings interestingly well. The beautiful haunting piano ballad of space and time of Shelagh McDonald’s Stargazer, shows potential symphonic folk at it’s best as Beau comes in with a Folk-turned-Psych Rock in the essence of Pink Fairies Never Never Land-era of Silence Returns.

But I really love Trader Horne’s The Mutant. It has a piano-acoustic-flute sci-fi touch of a creature is in danger of death. It has a Jim Croce feel of a waltz in a creepy yet interesting tone that Jackie McAuley wrote in a singing/whispering speaking tone. Not to mention the fade away Jazz Piano ending.


I really enjoy this amazing 3-CD set. Not just because of the music, but the way it’s a trip through time of the what was and why some of the bands and artists never got any recognition in the obscured and overlooked treasures. Only thing I was a little disappointed that bands like Tudor Lodge never made it on there, but I must digress.

David Wells has finally brought a lot of amazing research to this compilation and I cannot wait to see what Grapefruit Records has in stores for more of the psychedelic releases they will release this year and the years to come.
Posted by znathanson at 10:35 PM