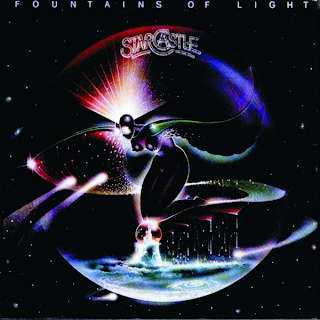 While they had their Yes influences in their system as I was taken by surprise by two of their albums including the sole self-titled debut album and their third album, Citadel as if they had taken them under their wings and making the music more futuristic and give Styx a huge run for their money. Interestingly, their second album, Fountains of Light was released at the beginning of 1977 at the time Punk was trying to hit the Prog and Pomp Rock genre with a mighty bulldozer and getting back into the 2-minute rock and roll influences of the ‘50s, tried and failed as their 5-minutes of fame was dwindling down.

As the cover looks very sci-fi as a robotic female looks down to earth and controlling to make sure everything’s okay, the music itself is breathtaking and touches of the symphonic rock sounds still influences Starcastle’s music by making it into a wonderful soundtrack. The album kicks off with the 10-minute opener, Fountains and it makes you feel that you are embarking on a wonderful journey that is beyond the Milky Way into the solar system of our planets.

Terry Luttrell’s vocals shines as Herb Schildt’s homage to Rick Wakeman on the Synthesizer and the late Gary Strater’s tribute to Geddy Lee and Chris Squire’s bass playing are crisp and touching as Hagler and Stewart do a collaboration of Steve Howe’s virtuosity on rhythm and lead that makes you know that they are not ripping off Yes. Fountains of Light, is one of the most rarest and underrated prog albums to come out of the late ‘70s, and while it is a majestic and hidden classic album, that they could have written the this as a score to the original Star Wars.

The light and upbeat melodic tempo tones on Dawning of the Day, has a powerful and very lukewarm hooks that are jaw dropping and out of the blue moments that would make you take notes in your piece of paper while Silver Winds starts out as an 8-bit videogame synth introduction that reminded me of a pre-Super Mario Bros. that Herb does at the beginning, they go into the Prog-pop meets Hard Rock territory with a punch of powder kegs thanks to bassist Gary Strater and drummer Stephen Tassler’s balladry in the midsection as they let Terry go into the infinite.

True to the Light is very story-telling and soaring at the same time it is filled with an orchestral rock vibe and Arena Rock like no other with a lot of structures to go through your comics in the Marvel universe while listening to this. Portraits is a gentle lukewarm acoustic moody space crisp beauty that is a calm after the first four tracks, the acoustics and the moog combine together like a flower releasing all of its glory and waking the sun to get up to reveal what he has done.

The closer, Diamond Song (Deep is the Light), which was released as a single, but failed to chart, reminded me as sessions from the Fragile and Close to the Edge-era. Featuring those beautiful vocal harmonies, thunderous bass work, drums, and a beautiful organ work, makes it a perfect composition to close the album off, to head back home to Earth as you are wanting more. All in all, this is a wonderful album and why Starcastle were way ahead of their time and deserve the recognition they need.
Posted by znathanson at 11:28 PM