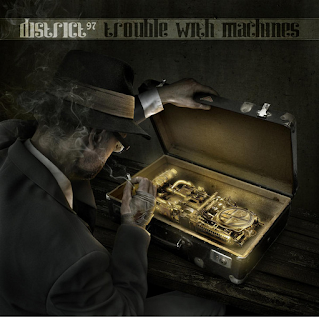 From their hometown in Chicago, District 97 has come a long way since their debut album back in 2010 with Hybrid Child that received word of mouth in the prog community and from supporters including Roine Stolt and Bill Bruford from The Flower Kings and Yes/King Crimson, and while Leslie Hunt who in the 2007 season of American Idol (I know, don’t mention the A.I. word), shows that she can really groove out with her vocals and not follow in the same vein where some of the others have gone into the MTV and VH1 mainstream. And since Leslie Hunt’s voice has blown me away, this isn’t her being the center of attention, but the band themselves has come into the circle and create something that is magical and beyond the stars.

That and their second album, Trouble With Machines, showed that since they are on the road to independent success in the Prog circuit. While District 97 has been getting a little bit of a cult status and with some of the dramatic time changes in both of the Progressive, Jazz, and Hard Rock genre, the songs and the structures in the arranging and composition proves to be something of a wonderful magical experience to encounter and embark on.

Starting off with the ‘80s Rush-like introduction on Back and Forth between guitar and synth creating this moody tension as they combine as one before Hunt’s haunting vocals come kicking in with a spooky atmosphere as it goes into high gear. The vicious thumping notes between the guitar and drums doing a militant roar and the stop-n-go musical touch as it becomes a jazzy swing metal movement on Open Your Eyes while the lullaby turned nightmarish structures between guitar and harp on the keyboards as it becomes a funky bass line and sinister synths, takes inspiration from Lewis Carroll’s Alice through the Looking Glass on the fantasy beauty, The Actual Color.

Now, once you add John Wetton, bassist and vocalist from King Crimson, U.K., and Asia, you know that you are about to embark on a wonderful weekend. With the 13-minute glorious epic, The Perfect Young Man, which you could tell they were writing a rock opera on The Silence of the Lambs and writing a piece for Hannibal Lecter as he was singing about Clarice’s look in a disturbing way, makes it weird, fun, and breathtaking at the same time as if they are paying tribute to the Scenes from a Memory-era of Dream Theater.

Suddenly it becomes an alternative vibe about the situations and complications to control and how we get sick and tired of it on Who Cares? As for Read Your Mind, which starts off as a classical Israeli violin solo that could have been done during Rosh Hashanah and Yom Kippur, turns into a moody yet metallic drama setting the tone with some wonderful movements as the 13-minute finale, The Thief, which closes the album off, is very adventurous.

Between guitar doing a lead section, keyboards, mandolin, and bass lines filling the scenery, makes it a heavy and symphonic rocking sound that comes out of the cavernous cave and a touch of a tribute to Jan Hammer’s solo in the midsection and Hackett’s virtuosity, proves that it could be made to a soundtrack to a sci-fi TV series set to wonderful music. With the band now in full gear, District 97’s second album will definitely be the next trip to the Starship enterprise for 2012.

Posted by znathanson at 7:05 PM