Within Temptation - The Unforgiving 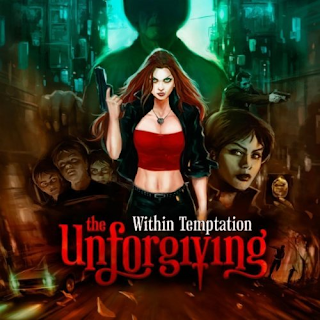 After taking a four year hiatus from touring on The Heart of Everything, it seems that Dutch’s Within Temptation have finally opened the door to get a chance to do a concept album for a big comeback in their touch of dramatic, epic-symphonic progressive metal music. It’s hard to explain why Within Temptation is one of the finest metal bands to come out of the Netherlands. I’m guessing it’s because of the structures of the songs, fierce guitar sounds that Robert Weterholt brings to the table while keyboardist Martin Spierenburg comes with an atmospheric sound that is very epic and almost like a film score. And don’t forget Sharon Den Adel’s vocals that will have male listeners in tears, you almost couldn’t play their music because of her voice, not just because it’s beautiful, but heart-warming, and emotional at the same time almost as if Kate Bush is watching her as if she was her stepmother being very pleased on what she’s doing and following in her footsteps.

All of that and The Unforgiving is one of the WT’s magnificent concept albums of 2011while it carries a part of their previous album, The Silent Force. There are a lot of roads to travel from and searching for the greatest albums to look for. As for The Unforgiving, it’s one of those albums that could be made into a movie set to beautiful music. The story of the album is about Mother Maiden, a blind elderly woman, who brings people back from the dead including Sinead to stop the city from its corruption of evil and sin. Sinead, who was originally a drug addict, who dies and is resurrected after killing her own father and trying to bring her daughter back from him after a vicious and tense argument. The whole story is almost straight out of Alan Moore’s storyline on V for Vendetta thanks to comic book writer Steven O’Connell and illustrator Ramano Molenaar, they really added a dark-like atmosphere for the Unforgiving.

With a huge kick in the stomach, you would say that the band would do a lot of research reading graphic novels and would listen to Metallica, Tori Amos, Pink Floyd, Rush, and Iron Maiden. However, the influences are almost like a Road Runner (no pun intended) which goes about 900 miles per hour as the lyrics deal with life, death, resurrection, and revenge. You want to talk about revenge? Here’s a lyric on the fast-driven single, Shot in the Dark, “Now I’m fighting this war/Since the day of the fall/And I’m desperately holding on to it all/But I’m lost, I’m so damn lost.” And isolation on Sinead with “I’ve been drowning in sorrow/Chasing tomorrow, running away/Now you’re crossing the borders/Sealing tomorrow but you’re not afraid.” Now these songs you wouldn’t hear them on FM radio in corporate American radio stations, but with real good music like on Total Rock Radio and Planet Rock in the UK would get a real kick out of it.

Alongside from the mind-blowing artwork that Ramano did, the production on The Unforgiving is a home run. Alongside other female symphonic metal bands like Amberian Dawn, Kingfisher Sky, After Forever, and Delain, Within Temptation may have probably released the prog album of the year for 2011. From the short dramatic spoken dialogue by Mother Maiden on Why Not Me to the haunting ballad finale Stairway to the Skies, It makes The Unforgiving an epic soundtrack from the compositions and the fight for survival. In The Middle of the Night goes mysteriously into the sound of Symphony X while the roaring sound of the British Steel-era of Judas Priest meets Depeche Mode on Faster with synths sounding like a speeding train and a sense of orchestral proportions.

Fire and Ice provides a Danny Elfman-sque score in the realms of the 1989 Tim Burton classic, Edward Scissorhands as it goes into a gentle grand piano of mourning for about a minute and thirty seconds as it goes into a glorified beauty with Adel’s tearful angelic voice. On Iron, we hear a reference of Dream Theater and Metallica as new drummer Nicka Hellenburg and the guitarists Robert Westerholt and Ruud Jolie, bring a sinister depth to the song as the three go in the race track to see who will win. Nicka has a strong mind-blowing militant drum section while the duo guitarist just go at it with rhythm and lead as if Iron Maiden’s trio guitarist Dave Murray, Adrian Smith, and Janick Gers are like father figures watching them and being so proud of them as if they are giving the torches to them to carry the Maiden flag.

Where is the Edge, with its previous ballad on Fire and Ice, contains the ‘80s synth sound, losing your mind, and a fierce rhythm section while Sinead, based on the character on the album, who’s back from the dead, is almost a theme song. It has a dance beat almost in the New Wave sounds of 1983, but it’s a catchy yet sounds like it could be used in a club for people to break dance to, however it’s a heavy track and lets the listener know that Within Temptation haven’t lose their Symphonic Metal sound, but it gave them a chance to cut free with energy. It’s destined to become a fan favorite alongside Mother Earth, Caged, Stand My Ground, and Ice Queen as the melodic acoustic touches for Within Temptation to calm down on Lost that allows Sharon to shine with her vocals as the band follow her to the light at the end of the tunnel.

Right next to Lost is Within Temptation’s homage to Space Rocker’s Eloy and Camel as if they were formed in 2006 with a Metal attitude in the realms of Dream Theater on Murder, showing that there’s a killer on the loose in a punch-like sinister guitar twist heard into an orchestral time machine back to being a vigilante to stop the evil sins in the world. As with the closing on Stairway to the Skies, A Demon’s Fate has everything that the Symphonic Metal and Within Temptation fans have in their veins for. You have an amazing drum patterns from Hellenburg, heavy rhythm section, keyboards sounding like a string quartet, and the vocals from the angels of Sharon Den Adel. You may ask yourself, “How the hell did they do that?” Well imagine if they wrote a rock opera on V For Vendetta, this would be it and see what Within Temptation have up their sleeves in the future.
Posted by znathanson at 2:42 PM