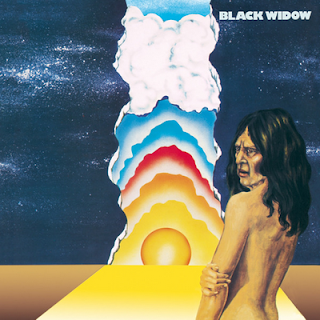 While bands like Coven and Black Sabbath were going into more of the darker territories into the occult and Satanism that was about to be called Doom Metal, one of those bands took it with a sense of humor with their stage performances that created a huge stir no other than Black Widow. Their music was darker, eerie, sinister, and hidden. It wasn’t bombastic and pretentious like ELP and Yes, but a whole lot of energy. Formed out of the ashes of Pesky Gee, featuring Clive Jones on Woodwind, Vocalist Kip Trevor, Guitarist Jim Gannon, Keyboardist Zoot Taylor, bassist Geoff Griffith, and drummer Romeo Challenger from the Caribbean Islands, helped created the Black Widow sound in an evil yet terrifying sound.

After causing the controversy in one of the infamous performances with a mock sacrifice with a nude woman that had the religious Jesus freaks protesting the band (this was before Alice Copper and Marilyn Manson), their second sole self-titled album, which was a follow up to their dooming debut of Sacrifice, saw Black Widow going into more of the psychedelic prog-pop sound that would have listeners and fans draw a line in the sand dividing people on if they love it or smash it into pieces. But with help from producer Patrick Meehan who helped work with The Groundhogs and Yes, it was an excellent match made in heaven to work on an underrated album in the ‘70s.

You have the soul-rock shuffle sounds in the realms of the Stax-era on the 7-minute boogie on Poser which starts off with a crescendo introduction that turns into a driving on the road sing-along sound that people go on the dance floor and just hit it off as Kip Trevor does his Steve Marriott vocalization section that is almost straight out of the sessions of Odgen’s Nut Gone Flake while Tears and Wine, the opening track, Tears and Wine, has a heavy organ rocker with an early reminiscent of Family’s Music in a Doll’s House and The Gods not to mention a mind-blowing sax solo that Clive does as he takes the band into a mournful beauty. The Gypsy, could have been a psych-pop single to write about the people. A touch of Spooky Tooth’s Sunshine Help Me that could have been lifted from it soaring organ sound and mixed with a touch of ragtime rock in the mix as if it’s 1912 all over again.

Bridge Passage features bassist Geoff Griffith’s fusion-sque lines as it segues the angelic psychedelic ballad on finding yourself and seeing how you can make it and not giving up on When My Mind Was Young. It has a baroque pop flavored touch on the composition mixed with heavenly organ sounds, lovely acoustic guitar creating the rhythm, and the daring electric guitar sound while the vocalization seems straight out of Yes’ Sweetness before going into the homage of Traffic’s I Just Want You To Know with another dosage of Soul Rock into the mix. The jumping yet bouncing upbeat tempo sees Black Widow going into more of the dancing rock tempo of The Journey.

It has the time signature of 4/4 and seeing where the band can go into far of a hard rock sound, makes it quite a fun track to sink your teeth into as Poser is a Bluesy yet funk-rocking driving song that is almost in the style of Cream’s first two albums and Hendrix’s Rainy Day Dream Away. Mary Clark introduces some haunting British Folk melodies with flute, bass, and screaming for Mary’s name that has never been done before on a Black Widow album as Wait Until Tomorrow sees the band going into the early sound of Metal and Proto-punk reminiscing an early retro sound of The Seeds meet Black Sabbath with an attitude as it goes into the ¾ jazz waltz moment between guitar and flute on the touching yet emotional ballad with An Afterthought as if the song is to leave you now with one last hurrah.

It goes straight into more of the British Folk haunting melodies to close the album off as they pay tribute to Comus and Trees with a medieval story on beginning of a new life, this time with a shuffle touch of the Grateful Dead with the Legend of Creation. Quite possibly, the album that would have Black Widow fans cringe, it was their touch of going into a psych-pop sound that didn’t catch the fan’s eyes for some for the doom rock band. It’s still again one of the most under-rated albums that deserve’s a lot of attention and the recognition it deserves for the doom metal and prog community to take wind of.
Posted by znathanson at 5:52 PM