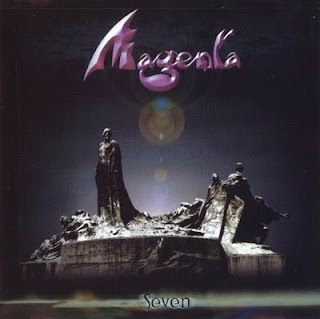 No, this is not based on the 1995 thriller starring Morgan Freeman, Gwyneth Paltrow, Brad Pitt, and Kevin Spacey, but this is a concept album based on the seven deadly sins which is known as the cardinal sins or capital vices to be more of the concept. Like a cross between Yes and Renaissance, this special edition reissue of their follow up to their debut album, Revolutions, Magenta has succeeded very well since forming in the late ‘90s out of the ashes of Cyan. It includes a DVD featuring interview with Steve and Rob Reed about the making of the album, bootleg live videos including an acoustic performance at the Pop show they did. And of course the 5.1 surround sound that makes you feel that the album was made to be an epic animated film in the mind of Hayao Miyazaki.
There are only seven tracks that clock over 10 minutes except one for 5-minutes with Anger. But this here is heaven as to show why Magenta remains one of the most breathtaking Progressive Rock bands to come out of the 21st century. And this will definitely get you started to a style that follows into the footsteps of Annie Haslam, Genesis, Pink Floyd, and Yes. Christina Booth’s angelic vocals and her technique in her arrangements draw a closer line as a female version of Jon Anderson while Rob Reed does a lot of his keyboard virtuoso styles similar to Rick Wakeman and Tony Banks of Genesis and his bass lines in the mind of Chris Squire, Chris Fry is giving his guitar more layered sound similar to Steve Hackett, drummer Tim Robinson is keeping the beat flowing and see where the band might do some time changes in the key signatures and he does it very damn well.
And for guest guitarist Martin Shellard, he’s got a lot of high energy playing in the style of David Gilmour. The opening, Gluttony speed races in weird time signatures and twisted rhythm sections that the band does as Rob creates some dream-like keyboard sounds. At times it’s pastoral, emotional, and a thing of beauty in it’s lukewarm homage from the Close To The Edge-era, but it’s an adventurous step forwards to keep the band chugging like a train ready for lift-off. Showing the medieval and sci-fi fantasy they have for Magenta’s background ethnically tributes of Classical music to Symphonic Rock throughout this album for epic boundaries in this classic album, they did a lot of research for the unexpected. After the acoustic turned surprised moments of flashback memories of romantic spooky ingredients on Envy, they go orchestral on yo’ ass! With the Vienna Symphony Orchestra giving a dazzling introduction with the strings ala Concerto style! They give us a dramatic explosive Renaissance homage of 15th century baroque Italian style of Lust while Greed is worth listening to due to the ambient and atmospheric compositions in which I call it “The Hackett tribute.”
Anger is a short number that is 5-minutes, a powerful mourning number that its own tour de force and packs a real kick in the gut in the David Gilmour On An Island-era that Chris Fry does for the last few minutes of the number. The race track keyboard sound is back on it’s toes as they do a groovy jam session on Pride then turned symphonic folk rock into epic glory as for the final number Sloth, is a wonderful surprise fitness into the style of gracefully good fun into the style of Yes’ Fragile. This is right up in the female Prog Rock sound and Magenta's classic in the history of their career bringing Prog into the new generation of the 21st century.
Posted by znathanson at 2:24 PM