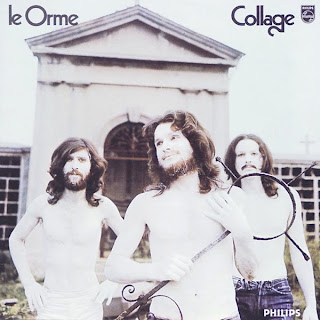 Influentially, the Italian trio which was an answer to ELP, Le Orme (The Footprints), released their second album in 1971 as they were beginning to go more of the pomp and circumstance influential sounds instead of their debut psych debut with Ad Gloriam. Since they are still together, and lead vocalist Aldo Tagliapietra is retiring from the band after being with the group for nearly 41 years, the group released magnificent complex compositions of arrangements. Yet related to the sounds of Banco, Genesis, and King Crimson, they offered a Ravioli taste with the usage of the keyboards into a swirling dramatic adventure they brought to the Spaghetti table done by Toni Pagliuca.
Collage shows how Le Orme could be in the eerie symphonic format as it was the introduction to go into an orchestral adventure rather than singing about politics and war. It is worth investigating too, not to mention the church-like scientific method of experimental music with Immagini as they go into the Sci-Fi world as Aldo’s voice sounds like a robot for the 24th century as Toni does a Julian Jay Savarin meets Keith Emerson style on the Organ to give it that warm welcome as if it’s to open the doors to a new world at a new beginning. The opening title track, sets the beginning of Orme’s world of Prog as they do a classical rock number as if they recorded this in the church as it pays homage to The Nice’s The Thoughts of Emerlist Davjack.
At time’s it medieval and pre-Dungeons and Dragons at the same time in the midsection when it sounds very 15th century of the Renaissance festival where the band performed this piece at the King and Queen’s wedding anniversary where they are tapping their toes nonstop to hear them play it. Era Invero, a romantic love song in a baroque way as the piece deals with a husband who has to work nonstop to pay for his family, but still loves his wife while Cemento Armato is a full-fledged mind-boggling composition starts off with Aldo’s echoing vocals as Toni does a classical piano introduction and then Michi Del Rossi comes in setting the tone of the number to give it a real kick in the gut by going pre-Goblin at times in which the band are doing a Jazz-Funk Deep Purple taste. Rossi’s drumming steals the number as he pounds away like Carl Palmer to give the band a tension-like piece as if they are composers of film music to a horror film that has a climatic climax.
Sgurardo Verso il Cielo bears again the beginning of Symphonic Rock. While it’s considered a fan favorite and rare footage of the band performing the piece with the orchestra, you’re asking for a hell of a lot of surprises coming your way. The duel between Aldo and Toni of Bass and Keyboards sets the scenery with a high voltage as the sound and Michi’s drum’s at times sound like rapid bullets shooting out of nowhere. It’s Pastoral turned acoustical landscape of unbelievable music coming out of nowhere for this composition that is straight out of Beethoven’s 1st symphony. The 6-minute Evasione Totale stands in the footsteps of a Krautrock version of Pink Floyd ala Space-Rock style in which takes us by surprise while the last number Morte Di Un Fiore, is very much the Beethoven Folksy Prog sound.
They go Orchestral Rock style in the tradition of Yes all the way as it raptures the pure melodic backgrounds in this mystical beauty. After all, the band will probably play this, Uomo Di Pezza, Felona E Sorona in its epic glory. And, there is no stop sign for Le Orme in all their power they give to the fans. As Prince Adam would say before transforming into He-Man: "By the Power of Greyskull, I HAVE THE POWER!"
Posted by znathanson at 9:29 PM