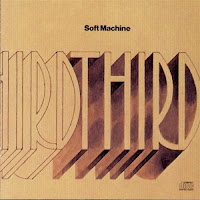 This is a special review edition for the Prog Rock review blog site dedicated to bassist Hugh Hopper who passed away of leukemia on June 7th of this year. Their double album simply called, Third, showed The Soft Machine moving away from the Psychedelic freak out scene at the London Underground scene including the UFO of the late ‘60s into more of a Canterbury Jazz Fusion scenery that would make fans of the Jazz scene appreciate the sound of what was known as Jazz Fusion. After Daevid Allen and Kevin Ayers departed to pursue a solo career and space rock techniques, It was up to the Soft Machine to move away the singles and make four tracks up to 18 and 19-minutes long with strange melodies and the beats going up and down and time signatures probably going up to 6/4 or 8/4, you can tell that the band were probably listening to Miles Davis’ In A Silent Way and John Coltrane’s A Love Supreme and Giant Steps.
The opening track, Facelift starts out with Mike Ratledge’s droning organ sound that sounds very geary and sneering at the same time and then it goes haywire into an avant-garde taste of organs going nuts by adding the sound the fuzztone. And after that’s going on, the sounds of the late Elton Dean’s saxophone, Hugh’s bass lines, and Jimmy Hastings clarinet taking over the piece while Robert Wyatt is doing an Elvin Jones drum style during the composition. And then the last 2-minutes it becomes almost sax attack and then calms down by doing a Kind of Blue going Jazz Fusion style and then it becomes crazy as a time machine going back to the beginning of the first four bars with a backward tape as if they might play the number again and then it ends in a blackout. Slightly All The Time begins with Hugh as if he’s paying an homage to All Blues while doing an interesting bass rhythm as the drums come in and the saxes coming in to do the arrangement while doing a magnificent solo that would have make Coltrane very proud of as if they were performing at a smoky club in the streets of Paris, France. And then before the breakdown, it becomes a Free-Jazz type of rhythm as the tempo speeds up like a race car that won’t stop going as the band ups the boardwalk as the flute solo comes in. It slows down by creating an ambient movement from the instruments by clocking in at 12-minutes from a wah-wah sound on the organ as Wyatt follows Ratledge’s composition as it becomes more of a Bebop and again, Free Jazz homage than being Acid Jazz.
Moon In June is Robert Wyatt’s moment to shine as he sings on the only track and is the ticket to ride for listeners of Jazz or the Canterbury scene to get a real kick out of. The song is almost a tribute to their first album but then, Hugh comes in as he brings the Bass to a level that no other bass players can’t even do for a split second on this Ballad turned Jazz Rock number about living in New York State as it becomes a scat solo done by Wyatt as the band lay the groove and then it becomes a quintessential statement.
The last number from the album, Out-Bloody-Rageous, begins almost like a Tangerine Dream album like atmospheric quality to it backward tape avant-garde style again for the first four minutes and then it segues into the band as they go into a straightforward jazz piece followed by Mike Ratledge’s organ solo ala fuzztone style that covers the entire piece as they go speed up and down the tempo and close it on a high note and then goes back into the ambient moment again for a short moment. Followed by a grand piano doing almost Thelonious Monk pastique as Elton Dean lays the love song type of moment on the sax as it becomes a psychedelic jazz waltz for a moment while the sax goes all the way and Hugh Hopper is dazzling on the bass as he comes up with some beautiful walking bass lines as they go Magma. And then the last three minutes, they're almost back into the ambient keyboard loops which seems very early take of the french prog group, Clearlight by going into the solar system as Mike does some spacey solos on the organ to come up with that technique.
Ahead of its time and different players coming in to be a part of the machine before calling it a day in the early ‘80s, their third album is one of the true masterpieces of the Soft Machine’s career, and this was something never done before and gained the following that it deserves the respects it needs from beyond the future of jazz and canterbury music.
Posted by znathanson at 11:59 PM