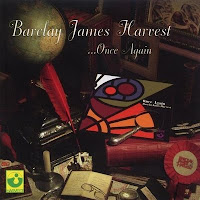 Whether it’s the tribute to the Moody Blues with Poor Man’s Moody Blues or the radio friendly rocker I Thank You, Barclay James Harvest always released some interesting albums in the 1970s. They have a very atmospheric and guitar layered background to set the fans wanting more of the sounds of BJH. But one of their albums took a surprising lift with their second album. Released in 1971, Once Again is up the musical anty. And it also gave the four-piece to do have a taste of lukewarm love stories, haunting fantasy and sci-fi tales, and British Folk music to go along with the whole ingredients of almost structured experimentations that were too dangerous for a single off the album and make it a single version in which these guys didn’t want to do.
Among the single of the poppy-psychedelic song Pools of Blue and Once Again, which was produced by the late great Norman Smith, who worked with; The Beatles, Pink Floyd’s first album, and The Pretty Things S.F. Sorrow, it gave the group to focus to push forward and it gave the members in the band including keyboardist Woolly Wolstenholme, guitarist and vocalist John Lees, bassist Les Holroyd, and drummer Melvin Pritchard the opportunity to designate and lengthen their instruments that isn’t hit by the mainstream from these four guys.
There are some amazing centerpieces that are never dull and never boring at the same moment by the time you listen to this in all of its glory. There are five of the highlights that would make your heart sink for joy; The 8-minute opening introduction of She Said which features Woolly doing some magnificent ambient keyboard sounds while John Lees is coming up with some heavy guitar sounds and a magnificent accompaniment including an eerie recorder solo that is almost straight out of an 13th century English Castle.
More out of the haunting elements is the Isaac Asimov influence on Happy Old World, which features John Lees playing a narrator about a life-form alien who comes to Earth who wants to deliver peace and freedom instead of hate in this glorified mini opera production. The love song acoustic crisp on Vanessa Simmons as if BJH were writing a love letter to their girlfriend and deciding who is perfect and who is the right person to date or is it all just a game. One of the songs that has become a live favorite among BJH and their fans is the symphonic explosive ballad Mockingbird, that includes a symphony orchestra which was done by the composing musical director Robert John Godfrey (before he formed The Enid) who was the bees knees with Harvest from concerts to BBC Sessions until 1974. It probably remains one of my all time favorites it almost reminded me a little bit of The Moody Blues Days of Future Passed album, but in an exquisite way!
And one of their tributes to the lovely princesses and the orchestral rock arrangements that seems very Last Unicorn orientated is Galadriel, which has more of the symphonic rock sound and it has an acknowledgement a tribute to Justin Hayward and it could only be done by the work of these guys who’ve been reading stories from CS Lewis, JRR Tolkien, and Peter S. Beagle. The band are still going strong. Woolly has a new band simply called Maestoso and they were touring under the title of “John Lees’ Barclay Hames Harvest” but it took a toll for one band member. Mel Prichard passed away six years ago. Today, the group are now a trio and they have a cult following in their home town and in Europe. Still one of the most magnificent bands to come out of the Harvest Label and the band that refuses to die in the underground-era.
Posted by znathanson at 8:10 PM