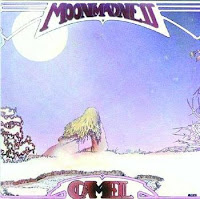 What is this beauty? Typical ideas and interesting new background music for a children’s lullaby music from listening to Camel’s music like discovering your parents record collection and listening to it by accident and falling in love with it. For me, I’m a huge fan of Camel’s music and their fourth album, Moonmadness, released in 1976, is a dynamic piece of work, from their previous album with no vocals on the essential instrumental album, based on the children’s novel by Paul Gallico of The Snow Goose, the band decided to go a little beyond the sound of the Canterbury scene with astonishing passages and heavy guitar work. The first five albums are progressive rock masterpieces, story wise, epic, and even more of a rock music score to an animated movie if you might find it interesting to listen to.
The short opening number, Aristillus, which is almost a flying instrumental number which features the late Peter Bardens on keyboards doing some dazzling keyboard passages throughout the number. He does some up and down beats on the Moog Synthesizer as he keeps the tempo going in 4/4 and then he does a little eerie moment on the synth. Then, he brings the tempo back up again as it ends on a high note. Song Within A Song is laid back and calm down with a virtuoso guitar work done by Andy Latimer and also doing a folky story tone on the flute. The lyrics are almost a love song and how to follow the lyrics and the chords at the same time. Camel sometimes would have an out of the blue structure for arranging and composition with a magnificent chugging synth, drums, bass, and guitar going together in one to come up with a spacey music that seemed that it was set in the 30th century.
Chord Change gives you a chance to see Camel coming up with unusual time signatures in strange moments. Starts off from more guitar like sound as a trio as Andy takes over as he harmonizes the vocals and then it becomes more of Hackett solo. And then, it becomes a mourning bluesy arrangement and then the music becomes a climatic high note as the organ raises up the volume as Bardens plays the notes very Wakeman like and then becomes a Jazz Fusion finale throughout the piece. Spirit of the Water almost sounded like it was recorded in a dark and watery cave as Bardens comes up with a sinister piano ballad as the vocals talks about the nightless beauty for the unicorn to drink her love the pond.
Another Night which deals with bassist Doug Ferguson, begins with a guitar waking up from its sleep and then becomes a sneering dark tale, it reminded me of a lost Pink Floyd track that David Gilmour wished he could have recorded for the Obscured By Clouds sessions, but it’s a mixture of sneering and a darker emotional tone and then it becomes a bass line which seems nonstop in the mid section as the guitar is doing an ambient sound along with the Hammond Organ with a mysterious tone. Air Born which is inspired by guitarist Andy Latimer, he takes the stage as he comes up with an unbelievable guitar work which sounds like an underwater submarine to look at new life at the bottom of the sea. I always wonder that Camel grew up reading fantasy novels and decided to give this a shot.
The final number, Lunar Sea is based on drummer Andy Ward as he closes up the album with a drum solo. It starts off with an atmospheric moog composition and then it becomes a ship to a new land in another dimension. The first half begins as an experimental mind-boggling adventure and then becomes a freak out passage as it ends with the synths sounding like an ocean to give its final wave. And then it becomes a blast off to say goodbye to its loved ones. It almost as if it was as if a soundtrack to the 1982 animated classic, The Last Unicorn.
Posted by znathanson at 1:36 AM