Bo Hansson - Lord of the Rings 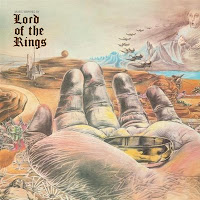 Most likely an alternate soundtrack to the Peter Jackson films, the Ralph Bakshi and the animated made for TV movie release of the Rankin/Bass versions of Tolkien’s trilogy fantasy novel, Swedish Keyboard maestro Bo Hansson went a little further from being a blues rock band in the Merrymen, to go beyond the musical horizon with his fingering on the keyboards. But with his first solo album, he didn’t become just a keyboard player, he pushed the envelope so far, he wanted to take it to another direction with the composing score to pay tribute of JRR Tolkien.
It all started back in 1969 when he received a copy of the book from his girlfriend and then he decided to give it a shot. Hansson twiddled some interesting sounds on the organ at his friend’s apartment, but then was evicted because of the neighbors were complaining about the noise he was making. So, he moved into a small cottage in an Island in Stockholm where he would start coming up with the pieces with drummer Rune Carlsson, flute player, Sten Bergman, and on woodwind Gunnar Bergsten. But for Bo Hansson, he was a virtuoso. He played the Bass, Guitar, Hammond Organ, and the Moog as the group were recording some sessions in the small house in the island. And so, the Music inspired by Lord of the Rings was born in 1970.
The opening number, Leaving Shire seems to have a strange taste for Hansson: an eerie Spaghetti Western soundtrack that sounded like it was recorded in a dark and cavernous place which features a floydian guitar sound while the organ has a haunting chorus in the background with an Indian tribe sound on the drums and the tambourine to the core, The Old Forest and Tom Bombadil has that ambient ‘70s experimental movements with Organ, chugging rhythm guitar, slide guitar going down, and dark flute solos, homage to Mike Oldfield’s Tubular Bells. Fog on the Barrow-Downs is atmospheric: the moog birds setting the scenery while the guitar is doing some howling Spanish classical guitar work while the organ is mourning in pain to search for the precious Ring. The Black Riders & Flight to the Ford starts off with the Organ setting the tension and then it becomes a train-sped tempo from the drums and keyboards with an African tribe to the mix. To have you running to the ford, listen to Hansson’s bass, organ, and guitar licks deliver a punch – the last few minutes its him doing a psychedelic fuzz tone on the guitar, sometimes its crying for help or leading to Frodo Baggins final showdown with the Black Riders.
While the album is a dynamic epic of sci-fi proportions, Lord of The Rings is weird and strange: At The House of Elrond is a crystal mellower downbeat while A Journey in the Dark and Lothlorien have a taste for the gothic cathedral to go haywire with the Keyboards making them sound like its Halloween all over again. Shadowfax goes back to the Indian tone with the drums, guitar, and organ to make it really fast for about 50 seconds. The Grey Havens in which Frodo leaves with Bilbo, the three elves, and Gandalf to search for new land, is a mourning instrumental ballad which sounds very David Gilmour like on the guitar while the keyboards set the emotions for the three Hobbits saying goodbye to their friend as they start a new chapter in their life as the ship sails for Frodo to a new adventure one more time with his uncle Bilbo Baggins. For a concept album, LOTR was a huge hit in Scandinavia and in the UK where Tony Stratton Smith of Charisma was blown away and released it in 1972 as it reached the top 20 in the UK album charts. Wizards, Goblins, Elves, Dwarves, and hairy legs of Hobbits, and the volcanic demon of Sauron? Music doesn’t get much better than this!
Posted by znathanson at 1:26 AM