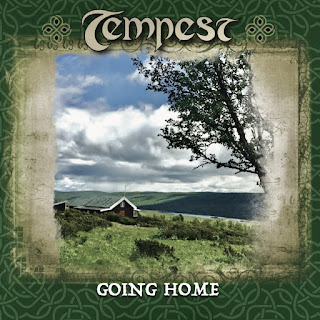 How long it’s been since I’ve listened to some real good music and reviewed on my blogsite, Music from the Other Side of the Room? The answer, I really don’t know. It’s hard to tell. So, last night I got a chance to listen to Tempest’s latest new album, Going Home. No, not the one with Allan Holdsworth, Patto's Ollie Halsall, and Colosseum drummer Jon Hiseman, but a Celtic band from the San Francisco Bay Area who launched back nearly 34 years ago. The last time I reviewed them for my blogsite was back in 2015 for The Tracks We Leave, and that was it. Until now.

Despite various line-up changes, the band is still going strong. So it’s been four year since their previous release Thirty Little Turns was released. Now in 2022, the band are stronger than ever with Coming Home. When I listened to the new album, I was quite taken aback on how they came back with a giant battering ram to bring the roof down once again.

And this time, it’s with real vengeance. The opening track Mrs. Preston’s has a heavier powder keg eruption with mandolin, brutal guitar chords, and violin dancing to the beats with galloping percussion work.  You feel the intensity, the sound, and the dancing arrangements they would create to get listeners off the floor and do the jig until the crack of dawn.

But what a great way to start the album off with a bang. Then we head off to sea with a cover of Roger McGuinn’s Jolly Roger. It has this sing-along vibration, militant drum work, organs delving into a mournful state, and the hope to reach dry land as Hjemreise walks into the British folk sound of Steeleye Span’s All Around my Hat-era by singing in the styles of Black Jack Davy.

You feel the band tipping their hat to the masters as they channel the border ballads throughout Europe and America before returning to the step dance’s once more in a Bach-sque groove for The Optimist. Then, they sing it in Norwegian for the sisters on Systrarna and Shepherd’s Daughter.

I can imagine it’s both Lief and Lee singing together in this song as he gives her a chance to come center stage to bring these ideas of hope and will into the song as they continue to set sail with some unexpected twists near the end for Lee hammering her violin down as she dances across the aisles on the boat to give a chance of relaxation and enjoyment despite going through all that heavy thunderstorms they endured.

Dark Lover sees Tempest opening up the late ‘70s era of Jethro Tull’s folk-rock trilogy, tackling the Heavy Horses period. Lief tips his hat to Ian Anderson in this song. You feel some of that energy of the band’s legacy during that time frame. And some strong energetic touches of unsung heroes, String Driven Thing thrown into the mix also.

Now what’s this? Have Tempest transformed into a Celtic Glam Rock band on Devil and the Farmer? Well with Lee transforming herself into a snarling beast on double-tracking vocals, the answer is yes. She’s hammering it down, having a blast while playing the violin. You hear elements of Slade and Horslips rolled into one as the song deals with while you make a deal with Satan, you pay the ultimate price.

Because not only he does that, he has a card underneath his sleeve, and it isn’t going to be pretty until the very end. Speaking of the end, we’re at the home stretch of reaching dry land by returning back to the Celtic-Classical Folk styles of Dream Morris and a cross between The Beatles harmonica sound on Love Me Do and Gentle Giant’s Acquiring the Taste to receive one of Paul’s Chickens with some McLaughlin-sque midsection solo improvisation, it’s been one hell of a ride to embark on.

Tempest has done it again by Going Home. It proves that they have brought more of those gigantic cannons to fire whenever they go through another song or instrumental take, they know when to fire. And I have to say that while it took a few listens, I hope to hear more from them. Because I hope they have more brainstorming ideas to come in the roaring ‘20s.