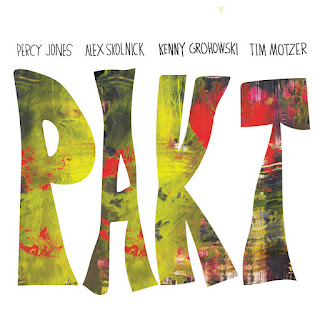 It’s quite a strange concept that Dr. Leonardo Pavkovic would create some strange experiment inside his laboratory at the basement of MoonJune Records. But something has lurked underneath the curtains that is waiting to be unleashed. It is a form of live music from one of the most important quartets that has unleashed all of its ammunition, and bring it to life at the Shapeshifter lab where originally Markus Reuter, Tim Motzer, and Kenny Grohowski had recorded their experiment live for a MoonJune release back on August 18th, 2019.

Brand X’s Percy Jones, Testament’s Alex Skolnick, Kenny Grohowski, and Tim Motzer, have brought enough fuel to light the fires up for this amazing 2-CD live recording at the same venue. Recorded last year during the lockdown, you can imagine yourself being in the venue, being free from the craziness that’s going on in the outside world.

Listening to the first act entitled The Unsilence, you can feel the tension cut with a knife. You have Alex and Tim going at it by creating this beautiful sculpture as if they were channeling either Jackson Pollock’s art design or creating more magical spells to show off to their friends instead of pulling a rabbit out of a hat.

For Alex Skolnick, he’s more than just a Metal head, and a member of Testament, but he can create these visual scenarios on his instrument while Percy’s fretless bass goes into a counter clockwise as he climbs each ladder with challenging results. I love how Kenny’s drumming goes on this rampant whilst Alex channels the Krautrock masters, Manuel Gottsching and the late great Michael Karoli from Ash Ra Tempel and CAN.

I imagine he would feed Motzer some strange idea as they open up the soundscaping location before they take us into Andrei Tarkovsky’s wasteland from the sci-fi epic, Stalker. It is very chaotic and very hay-wiring at the same time. PAKT would do some strange experiments as Motzer uses bits and bobs throughout his electronics to go all over the Shapeshifter lab like there’s no tomorrow.

He and Skolnick are hammering down those Egyptian-like textures in the hottest part of the Sahara desert. They work well together as a team while Percy and Kenny go into a little Space Jam (no pun intended) as they take a trip into the Isle of Everywhere from Gong’s You-era meets Herbie Hancock’s Headhunters period.

The second act is called The Sacred Letter. Now this is where we really get those boiling waters bubbling. It adds a virtual landscape into an unknown wasteland that is waiting for us. Motzer’s eerie textures sets up the illustration while Jones walks back and forth by giving Grohowski more intense ideas on his drum kit.

There is a moment where I believe it’s Alex tipping his face mask to Mike Ratledge’s composition on Facelift from The Soft Machine’s Third album originally released in 1970. It’s quite a treat from Alex making his instrument sound like a wah-wah organ that would have gotten Mike’s stamp of approval to create something like that.

Meanwhile, they walk into Sonar’s territory as Alex and Tim go for the jugular. They walk into David Torn’s sonic voyages, but carrying more of the Irrlicht-era from Klaus Schulze. Percy is a madman to go crazy throughout his bass exercise as Alex, Kenny, and Tim follow him in hot pursuit.

The climatic ending is where all hell has broken loose for PAKT. They raise the roof up by going into a nuclear explosion by giving it a mind-boggling finale with a sigh of relief. But I can imagine there’s more to where it came from. I just wish it had continued more instead of a cliffhanger ending by leaving us dangling on top of the Grand Canyon.

Contributor to All About Jazz’s own Mark Sullivan who wrote the liner notes for the 2-CD set, watched the livestream performance during the pandemic. And I could imagine that it was quite a revelation for him to watch these four amazing geniuses bringing listeners on an adventure that we will ever think of dreaming about. I hope to hear more from PAKT in the years to come from the MoonJune label. I can always wait and hear to see what not just the quartet, but what Leo will have in store for us in the roaring ‘20s.

Posted by znathanson at 2:46 AM