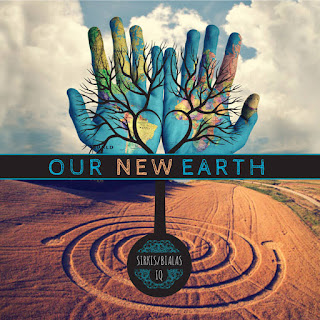 Since their establishment five years ago, the Sirkis/Bialas IQ have brought the institutions of going beyond the structures of Jazz by taking these gigantic steps into the worlds of different vocal arrangements, church organ, Konnakol, crotales, and the waterphone. Our New Earth sets up this amazing style of a spiritual guidance that MoonJune have unleashed last year.

They take these beautiful arrangements and put them together by creating this strange, mysterious, and surreal adventure that is brought to life featuring incredible liner notes by Bill Bruford. Our New Earth is showing the listener a chance to make our home planet, safe and secure from the dangers that will await us for many years to come. Both Asaf Sirkis and Sylvia Bialas are awaiting to be a part of that journey. And from the moment you put the album on, you’ll begin to wonder why they are so damn good.

With the sound of the waterphone that was invented by Richard Waters at the end of the ‘60s, it creates this haunting atmosphere that is lurking behind you for a Spooky Action at a Distance. Sirkis captures the intensity on the cymbals to see what Sylvia will come up with next. Like something out the Zeit-era from Tangerine Dream, it sends these shivers down your spine as the instruments open up the doors to see where Bialas is going.

And she sings in these melodic textures that give Frank Harrison and Kevin Glasgow to follow in her direction. Letter to A features Harrison on the Church Organ. I almost have this feeling as if he’s tipping his hat to Kit Downes. It has this mournful sequence before Sylvia’s vocalizations opens up the door to the gothic cathedral by giving Asaf a chance to help out in his drum kit.

The title-track gives Sirkis a chance to give himself carte blanche. You have the Indian scat singing of the Konnakol, high-pitch percussion sounds of the Manjira (Taal), and the crotales that he takes centerstage by having these percussions to the forefront. As the droning sounds which I might think it’s from a Sitar, I’m not sure, but Asaf comes out of the woods like a warrior that is ready to attack for the first three minutes to sweat out these machine gun bullets.

And he does it perfectly. But just as he finishes, the sound suddenly changes by opening up the pearly gates to reveal its true glory into the style of the Dance of Maya section. And then it spirals into the abyss for Birkis to enter inside those caves and seeing Frank himself giving out the last rite on the church organ.

The first two minutes of the Land of Oblivion sees Glasgow channeling his rhythmic structures and chords on his 6-string bass. He goes up and down on the frets as if he’s walking through this spiraling staircase while the wind howls throughout the Sahara desert by giving Bialas a soothing warmth to open her heart for us before Harrison’s Guaraldi-Monk like structure on the piano makes it a nice and beautiful segment.

MoonJune Records really hit a big challenge for me to delve into Sirkis/Bialas IQ’s work. And Our New Earth is one of them. While it took me a few listens during the Christmas break, I have to say that both Asaf and Sylvia have done an amazing job. Will there be more challenges in the roaring ‘20s from MoonJune Records? Let’s see the new decade will be for us. But the mystery of peace and surrealism, is an adventure worth exploring into Our New Earth.

Posted by znathanson at 2:01 PM

You are a poet, Zahary. Thank you so much for taking your time and listening carefully to our music... We appreciate it very much!!!