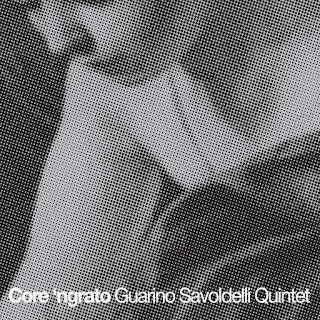 Italy has been home to the masters of pop, progressive and jazz. From the minds of; Franco Baggiani, Arti + Mestieri, Le Orme, Banco Del Mutuo Soccorso, Metamorfosi, and Franco Battiato. But it’s more than just Federico Fellini, Leonardo Da Vinci, and Antonio Vivaldi. Now I have some mixed feelings over the music of Boris Savodelli when I reviewed The Great Jazz Gig in the Sky, three years ago.

I gave it a very interesting review of his take of Pink Floyd’s Dark Side of the Moon during that time frame. But looking back on it, I was very disappointed with the way on the way it was handled. I have some very strong opinions about covering some of the masterpieces which I won’t go into. However, listening to Core ‘ngrato which translates to Ungrateful Heart, is the album that the Guarino Savodelli Quintet have unleashed by finding their nieche.

This is real good jazz at its finest. Released on the Data Zero label and distributed by MoonJune Records, Core ‘ngrato is a return to those roots at the heart of the genre that has never heard before. From the realms of Classical, Free, and Bebop, this is an album that has been brought to the table for not just Savodelli, but for saxophonist and clarinet player Guido Bombardieri, pianist Corrado Guarino, contrabassist Tito Mangialajo Rantzer, and drummer Stefano Bertoli.

They bring these six magical moments on Core ‘ngrato. And whatever kind of special brew they were cooking in the kitchen, it must have included some incredible spices to add the flavors filled with both Tabasco and Wasabi sauce. So ‘le sorbe e le Nespole Amare has this incredible waltz with an intensive rhythm section that the sets the quinet up with some punching grooves.

As Boris sings into the sounds of the late ‘40s/early ‘50s, Tito plays into these strong melodies on his string bass in the midsection while Malafemmena sees Boris channeling his inner version of Tom Waits as Corrado and Tito go into this walking rhythm by following Boris into the heart of Central Park as Corrado channels the styles of Thelonious Monk and Tito honoring Charles Mingus.

When you listen to Tammurriata nera, the quintet have unleashed their weapons as they travel to the hearts of Brazilian Jazz with a Samba twist. I could imagine Boris is having a blast singing this song by having this bullhorn-sque sound by getting the tempo’s going for this midsection honoring George Gershwin’s Rhapsody in Blue.

Cicerenella is where Boris gives Tito and Guido a chance to go into this dueling match between their instruments as they have some creative force with some intensity before Stefano’s drums take center stage by pounding them by sweating bullets all fired up in his machine gun. He knows what he wants to do throughout his drumkit by tipping his hat two of his masters, Buddy Rich and Elvin Jones.

La Nova Gelosia sees Corrado’s piano setting up these minor chords inside an old abandoned house that used to be beautiful, has now become a thing of the past, and turned into the loss of innocence. It gives Guido to set up this mournful scenario on his sax that will hopefully give the house a chance to be rebuild by starting off a new chapter in its life.

Sto Core Mio brings Tito to the forefront once more to do this dance-walk on his bass that gives Boris a chance to sing and walk before the clarinet flies up through the air while going up to the blue wide wonder with different time changes throughout the ballad. Core ‘ngrato took me a couple of listens throughout the entire album from start to finish.

And while the quintet have brought their meals to us with their unbelievable compositions, there is some specialty to the sound of Jazz that had been missing for a long, long time. And it’s opening those doors to reveal its true power and glory on Core ‘ngrato.