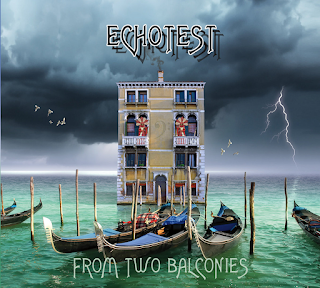 Back in the fall of 2005 during the fall semester at Houston Community College, I can remember going to the defunct Blockbuster Video and renting one of the films was the documentary Rock School which covers the Paul Green School of Rock Music. One of the students was Julie Slick. Now at the time, I didn’t know much about Slick since watching the Don Argott film. She been busy working on her solo work, and with bands with Crimson alumni’s including; Adrian Belew Power Trio and The Crimson ProjeKCt.

And from the moment I’ve listened to The Crimson ProjeKCt’s Live in Tokyo which at the time Anglagard opened for them at the Club Citta in March of 2013, I realized needed to discover Julie’s music. Until this year, I received a package in the mail which is EchoTest’s new album entitled, From Two Balconies. The formation of EchoTest began in 2011 when Marco Machera and Julie Slick met at the Three of a Music Pair Music Camp.

They have released two instrumental releases from 2014 to 2015. With their new album, it’s a step-forward and featuring lead vocals on seven tracks. Not to mention some amazing guests including; Drummer Pat Mastoletto, Tim Motzer on Guitar, Vocalists Mike Visser and Ali Wadsworth, and violinist Sarah Anderson to name a few. Described by Julie herself, it is a conceptual texture on a contemporary tragedy as their lives are in limbo and in a tempestuous tormented limbo.

Derek Riggs’ artwork of the front cover, details the essence of an abandoned house guarded by two people as if it’s in the middle of a stormy weather that almost brings to mind of Stephen King’s The Shining. While it’s this mixture of modern-progressive, electronic, and post-rock music, EchoTest’s new album is an interesting experience from beginning to end.

Supercell begins with this alarming introduction done by Julie's Bass VI making it sound like an alarm clock going off as Visser’s voice delve into both Gazpacho’s Jan-Henrik Ohme and Radiohead’s Thom Yorke-sque textures. With a mysterious realm between Psychedelic-post-rock and electronic music, it is a bright dystopian chasing composition to find the inner self with a laid-back sound.

The spacey voyages on The Mystical Connected Us, at first begins with a spacey voyage as the lyrics deal with someone calling back to come home before delving into an echoing reverb/delay effect of the pop-and-slap sounds of the Bass. Suddenly, it transforms into this chaotic scenario that Tim does as he crosses between the Crimson sound and Arthur Brown’s Kingdom Come before the electronic drums end on a fading loop.

Confirmation Bias is a very interesting track. EchoTest delve into the waters as they take an approach of the doom metal genre. With it’s Red-era fuzz-tone shriek and Peter Hammill approach, the song deals with a split-personality whilst dealing with the nightmares and confronting your own worst enemy. The opening will make you leap out of your chair and giving you as a listener, a terrifying jolt.

The Plight deals with the struggle to survive, but knowing that the end is near. Sarah’s violin sets the scenery of what is happening right now in the character’s mind as you could his/her struggle and the pain of what they’re going through as the music resembles Gazpacho’s Demon-era while Radio Sayonara channels the Space Rock masters, Hawkwind.

This is my third time listening to From Two Balconies. And whilst I’m very new to both Julie Slick and EchoTest’s music, this is a real blessing that they bring to us. Now I need to delve more into her sound and vision she brings to her music and in the footsteps of Crimson’s music and also, the Progressive and Experimental approach she will bring next to the table with more brainstorming ideas she will come up with.
Posted by znathanson at 12:08 PM

You really should check out Julie's two solo albums, as well as the two previous EchoTest albums (the first of which, Fourth Dementia, was labeled as "Julie Slick and Marcho Machera," before they chose the name EchoTest). From Two Balconies is very different from all this previous stuff, in really interesting ways -- although you'll certainly notice some common threads -- and the earlier stuff deserves every bit as much attention as the new album!