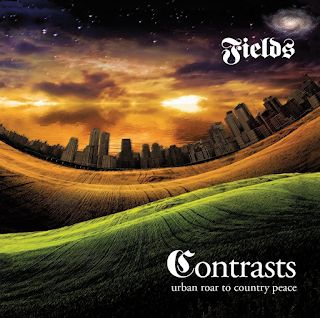 Esoteric Recordings are for me, one of the best labels since discovering the reissues of the first two Rare Bird albums, Supersister, Burnin’ Red Ivanhoe, Julian’s Treatment, Marsupilami, and one of my favorites, Web. One of the bands that I almost thought they released only one album was a group called Fields. Since I championed their sole self-titled debut album back in October of 2010, I thought they could have gone on to be bigger than Yes or ELP.

Well here we are in 2015 and this year, something has crawled through into the other side of the room. It is Fields unreleased second album and follow up to their sole self-titled debut which could have been the next big thing, but then shelved for 41 years because of the changing of the guard in the Music Business and management changes which can be a real hassle. Not to mention, never listening the entire album from start to finish and never considering another follow up. Again, it can be a big gigantic bummer.

They were three quarters done and it’s one of the reasons what the album could have sounded like. And now Fields second album entitled, Contrasts: Urban Roar to Country Peace, is perhaps one of the most touching and powerful hidden treasure gems that Esoteric Recordings have released. From the moment I put the CD on, I knew that something brilliant is about to happen.

Vocalist and Bassist Alan Barry left the band to pursue a solo career because he knew he couldn’t be in a group and preferred to embark to work on his own. And soon, the late Frank Farrell of Supertramp entered the line-up. The band recorded their second album at CBS Studios in London at Theobald Street 43 years ago and it may not be their best album, but it is a treat discovering the hidden treasure of what could have been their follow up. It has touches of Prog, Jazz, and Classical music thanks to Graham Field’s keyboard work.

On tracks like the Organ improvisation Put Out to Grass, it shows Graham in a symphonic mood as he Frank and Andy help out to set the tempo for an amazing groove and it almost resembles a tribute to both Cressida and The Nice. Opener, Let Her Sleep begins with sirens blaring and bursting into a blaring sound that Graham does followed by McCulloch’s drum work and that little bit of a Bach-sque concerto that Field does is mind-blowing before Frank sings “One more knock/Yes it’s one more shock/Like the great tick-tock/Of a giant clock/If there’s someone there/Let him hear my prayer."

It is such a powerful line and almost a plea for someone to give the person some sleep before the clock goes off with the bells. Then it segues into the ascending wonders of Wedding Bells which gives Andy McCulloch a chance to go into some powerful lines on his drums and not to mention the string section to close it off at the end while the tempo changes into a moment of a Piano ballad as Frank sings his heart out on Someone to Trust in which it’s an homage to John Lennon’s songwriting and with touching beauty with an emotional style on The Old Canal.

But the music changes from Classical and Ballads into a driven Jazz Fusion rhythm as they go into a driven beat on Wonder Why. Frank Farrell’s bass line, Andy’s paced drumming, Graham’s keyboard going into major and minor chord changes and synth solos followed by the vocals singing which almost reminded me of The Northettes, gives it a perfect transcendental experience.

Fields then goes into a joyous and high-spirited wonder with an enthusiastic feel on how Music Was Their Game before closing off with a lukewarm acoustic folk turned into a pastoral adventure on Storm. At times it reminded me of the Trespass-era and bits of Yes thrown in with the climatic thunders between organ, bass, guitar, female vocals, synth and Frank’s voice featuring stop and go time signature as Graham goes into the fanfare rhythm on his Hammond and synth solo as if he’s creating a magical adventure before fading into the sunset.

The three bonus tracks are like more of the hidden pieces that were left inside the treasure. There is the mellowing groove on Set Yourself Free, Graham’s tribute to the Thames on his Rhodes and Church Organ as Frank helps out on the Bass melody with the ambient and symphonic beauty The River, and going into a Blues 12-bar rhythm to close it off for Spring.


The 15-page booklet features liner notes by Sid Smith that includes an interview with Graham Field about the making of the lost second album and features an amazing artwork of a city and one picture of the band featuring Frank Farrell. Esoteric Recordings have done a wonderful job releasing this unseen gem and if you love their sole self-titled debut album, then this is the one worth exploring next to see why they were ahead of their time and brought the essence of Symphonic, Jazz, and Classical Prog like no other.
Posted by znathanson at 10:59 PM