R-Evolution Band - The Dark Side of the Wall 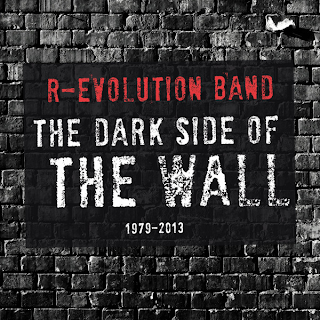 Since their formation back in 2010, from the mind of Jazz composer and instrumentalist Vittorio Sabelli, R-Evolution Band released two albums, (One Way and Versus) and then, they decided to do something that was crazy and peculiar. By re-working and re-telling the story of Pink Floyd’s 1979 epic masterpiece, The Wall by making it insane, weird, and chaotic. And it’s a crazy combination of Avant-Jazz, Hard Rock, Psychedelic Blues, Swing, Ambient / Atmospheric, and Classical at the same time. Alongside Vittorio Sabelli, the band considers on this album; Marcello Malatesta on keyboards, Gabriele Tardiolo on Guitar, Bouzouki, and Lap Steel, Graziano Brufani on Bass, and Dreste Sbarra on Drums.

It’s complex, difficult, and interesting at times. Not to mention seven centerpieces to get you ready and have your seat-buckled for the adventures of the avant-sounds of R-Evolution Band. Their take on Mother, has this sliding wah-wah guitar blues in the styles of Ry Cooder featuring a heartbeat and Ilaria Bucci’s voice resembling Merry Clayton as if she’s singing in a church to give a mourning that sends chill down your spine before it goes into this stop-and-go atmospheric bebop jazz sound between Vittorio’s woodwind solo and Sbarra’s drum keeping the patterns for a moody walk into the streets in the evening.

Then, all of a sudden on Requiem: Funeral of Queen Mary II (Don’t Leave Me Now) has a spoken-word related sound before going into the operatic vision for a quick second on the lyrics and the gothic church organ as it plays the classical Purcell piece while Another Brick in the Wall (Part 2) goes into the sneering hard fast-driven Black Metal with growling vocals done by Angel C. Malak. Meanwhile, Hey You (Intermede) becomes this electronic upbeat tempo with a lot of driven patterns, along with the violin going into the middle-eastern sounds of Egypt and the woodwind done by Vittorio setting the scenery into a whole new level and paying tribute to Olivier Messiaen. You get the idea, they take the sound of the Floyd’s work into uncharted territories.

Nobody is done in the style composer Ennio Morricone. It has that symphonic structured beauty as if he had done the score for Terry Gilliam’s 1985 Sci-Fi classic, Brazil as the militant dancing upbeat fanfare on Bring the Boys Back Home, segues into a soft-gentle electronic jazz waltz in ¾ time signature featuring the synth and beautiful vocals and guitar lines on Comfortably Numb. And then they pay homage to the Physical Graffiti-era of Led Zeppelin and Rick Wakeman that has been rolled up into one with some heavy riffs and wonderful moog solo’s on Another Rock in the Wall.

And they do something very wacky and interesting. They do their take of The Trial into a 1930’s and early 1940’s swinging Jazz sound before the growling nightmarish experimental tension comes into full swing for The Wall to collapse as each of the instruments go into a chaotic climatic finale with a big crescendo that is mind-boggling and unexpected.


I have listened to R-Evolution Band’s The Dark Side of the Wall about four times already and It’s very interesting and difficult to listen to from start to finish. It’s not an easy album to listen, however they got something up their sleeve and its okay. Not good, but okay. So if you are ready to go into the world of Vittorio Sabelli and the R-Evolution Band, remember to set the controls for the heart of the Dark Side of the Wall.
Posted by znathanson at 8:08 PM