In Silentio Noctis - Disenchant The Hypocrites 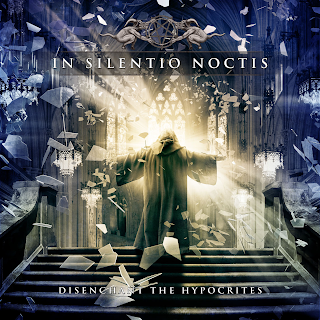 Something fresh and startling has risen out of the waters of Finland that has taken Symphonic Metal into an unbelievable touching, dramatic, and passionate sounds of overwhelming results. Bands like Amberian Dawn, Dotma, Katra, and Apocalyptica to name a few have formed in their hometown to create monstrous and orchestral metallic music along with powerful story-telling. And In Silentio Noctis, who have been around since 2006, they are soon going to be on the same boat with the others and they are definitely going to have a warm reception.

The band who had various line-ups, now features a new line-up and it considers; Armi Paivinen on Lead Vocals, Tuomas Leskinen and Samuli Reinikainen on Guitars, Aleksi Ahokas on Bass, and Veikko Ringvall on Drums. And special guests Ville Koponen on violin and Johannes Salo on Piano to lend help on the quintet.  Their new EP, Disenchant the Hypocrites, is a concept piece dealing with the issues of God and his servants.

There are touches of Opera, fast-driven guitar lines and riffs, machine-gun rapid firing sounds of the drums, and Armi’s vocals which is in the realms of Heidi Parviainen and Tarja Turunen rolled up into one and it’s a perfect combination to see where here vocals will go into various directions as the band follows her to see which road she goes to with her voice and they follow her with tension and difficult time changes.

There are only three tracks on the album, so it’s more of a Metal Opera with a lot of dramatic structures and let me just say, it is a complete knockout from start to finish. The Pit starts off with a militant snare drum and a string quartet along with keyboards before it goes into full gear with the church organ and guitars going into a thunderous mode to set the tempo and introduction of who In Silentio Noctis really are as Armi’s vocals kicks in and the time signatures go through fast and slow movements to see what would they do next.

The Black Metal sound comes in full handy and while there aren’t growling vocals on here throughout the story, it shows that there is a lot of momentum. Of Deception, for example has a lot of the heavy blistering riffs, doomy rhythm chords, and powder keg drum patterns that makes it the perfect tone to capture the symphonic boundaries in there and the vocals again, will send chills down your spine all of it coming to the closing track, Haunted.

Dramatic Chords and Classical Horn and String Section fills the section and not to mention the riffs coming in full swing that makes it an eruptive composition while the vocals and rapid-gunfire sounds of the drums charges in before it becomes a harmonic tour de force between the instruments and Armi herself to make it a climatic sinister finale that leads the door open to see what happens next in the story.

I have listened to Disenchant the Hypocrites about four times already and it’s an explosive, soaring yet poignant EP that makes you get your seat belts buckled up for a roller-coaster ride that you will never forget the moment you listen to In Silentio Noctis’ music. So if you admire story-telling and heavy driven beats, then this EP is a must have.
Posted by znathanson at 12:54 AM