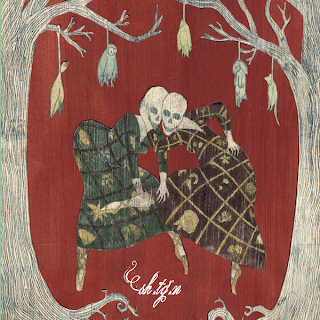 Almost as if they are following in the footsteps of The Mars Volta, Mogwai, The Cardiacs, Henry Cow, Frank Zappa, Magma, and King Crimson, Belgian’s SH.TG.N is one of the most eruptive and powerful bands to come out of the scene of Post-RIO-Pronk (Punk-Prog) bands to come out of nowhere as if the monster has let loose to reign hell on the small citizens of a tiny village to have a human feast. Their debut album, released on MoonJune Records, is like a volcanic explosion waiting to happen and it is out of this world from start to finish as if they almost recorded this for an experimental animated film from the ‘70s.

The band was founded three years ago by keyboardist Antoine Guenet of The Wrong Object, who wanted to take the genre into a whole new level and push it as far as he can go. And what Antoine has done, he has successfully pushed the envelope with SH.TG.N and it’s a perfect match and makes absolute perfect sense. Alongside Antoine, the band considers;  Wim Segers on Vibraphone, Yannick De Pauw on Guitar, Dries Geusens on Bass, Simon Segers on Drums, and Fulco Otervanger on Lead Vocals.

Fulco’s voice in which it resembles at times Tim Smith, Zach De La Rocha, Cedric Bixler-Zavala and a shrieking version of Marc Ysaye of Machiavel, he is the mad scientist to mix up those bizarre ingredients with his vocals as the band members help him to see which difficult time signature they would go into whether it’s a Hard or Jazz Metallic structures, and the experiments are quite extraordinary.  While they go into a full throttle Interstellar Overdrive with their instruments, it shows they are not showing off, but really push you over the edge for at times quiet and then becomes a throttling adventure.

Segers drum patterns makes it sound like a hail of bullets when he goes into town which is evidential on Deejays Should Have Low Self-Esteem as De Pauw’s guitar work has this raw and energetic Rodriguez-Lopez meets Fripp-like sound that is in your face and give the top ten mainstream radio sponsors, the big middle finger. There is some element of Zappa and a Metallic version of Gentle Giant and some jaw-dropping moments to take listeners by surprise.

There’s the Jazz-Funk-Fusion haunting momentum on Camera Obscura as Segers plays through the Vibraphone as Geusens creates this creepy bass line while Fulco goes into this political view on how everything is completely under controlled, but it isn’t by a world of Fools while it becomes an homage to Sabbath as if they moved away from the Doom scene into a transformation and became a Rock in Opposition pronk band with the thumping tracks; Esta Mierda No Es Democracia, Eraser Her Dad and Shotgun (Afraid Of).

A band that really knows their roots of RIO, Pronk, and Metal, this is a band that is completely mind-blowing and something would really get the underground clubs take notice of, SH.TG.N is soon planning to be one of my favorite up-and-coming bands and MoonJune have scored a huge Home Run!
Posted by znathanson at 7:47 PM