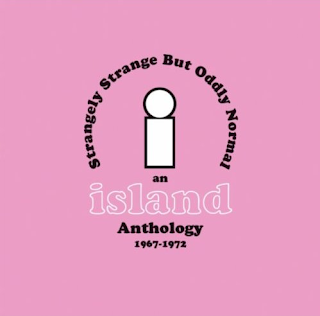 You know, I have become quite fond of hearing label samplers after hearing the Vertigo Retrospective back in 2005 after discovering that they’re some different obscure progressive rock bands from the late ‘60s and ‘70s. While hearing the compilations from the labels of Charisma, Polydor, Dawn, and Deram, it was time to take another leap from the swimming pool into the deep waters of the “Pink Label” period from Island Records.

While the Pink Label-era of Island is now considered a collector’s item in the Vinyl format that are now on eBay for a rocket price for that one lucky person to bid $120 or $300 of their own money and cherish this vintage collection and play it on their record player and go into a time machine like it’s 1970 all over again. Here, in this 3-CD set, it covers the underground scene in the psychedelic and progressive period from 1967 to 1972.

The 47 page booklet contains histories of the bands and artists in alphabetic order and a history of the label done by Mark Powell, label manager of Esoteric Recordings and author of Prophets and Sages. Since this is the 2009 edition, it doesn’t have the King Crimson songs Cat Food and Groon (they were from the 2005 version which is now out of print and hard to find), which is a minor let down, but listening to this set in its entirety, makes you feel like you could go back and check out the bands that would later achieve success.

When you listen to Strangely Strange But Oddly Normal: An Island Anthology, the title comes from the band, Dr. Strangely Strange, you will experience the sounds of Prog, British Folk, Hard Rock, and Avant-Garde experimental music from the bands and artists who had made it and some who never did. You have the names like; ELP, Traffic, Jethro Tull, Cat Stevens, Spooky Tooth, Mott the Hoople, Fairport Convention, Free, and Nick Drake to name a few who’ve influenced their sound of the genre and having younger generations to listen their music and discovering that real good music isn’t dead, it’s been revived for the 21st century.

Then there are some mind-blowing moments from the compilation like the symphonic psych-pop upbeat tempo of Rainbow Chaser by Nirvana (UK), the mellotronic fantasy proto-metal rocker of Supernatural Fairy Tales done by Art (Pre-Spooky Tooth) featuring Mike Harrison’s vocal arranging as if he could have been Roger Chapman’s brother while Brass Rock band Blodwyn Pig takes the Blues Rock sound with an attitude on Sing Me A Song That I Know So Well.

Also, the haunting melody of story-telling comes at you with Sandy Denny’s voice on The North Star Grassman and the Ravens and there is one band that some of the prog fans need to take note of. Prog-trio Clouds, who were championed by Keith Emerson, Rick Wakeman and David Bowie are the centerpieces in this compilation with organ, bass, and drums on the driven beats of The Carpenter and the orchestral dramatic ballad of psychedelic beauty on Watercolour Days.

There are some great sounds from the Folk and Rock obscurity from Quintessence, Fotheringay, Amazing Blondel, and Wynder K. Frog and showing how they were ahead of their time. So if you want to understand about the history of the “Pink Label” sounds of Island Records, this is one of the compilations that is worth the trip to follow the brick road into the Paper Sun of real good music.
Posted by znathanson at 8:00 AM

Say, you got a good article. Much thanks again. Wonderful.

Hi, I just discovered your blog via Bing.


Please maintain us informed similar to this. Thank anyone for sharing.


You address truth issue on that topic. I think you handled it in a professional manner.


Very amusing thoughts, well told, everything is in its place:0))