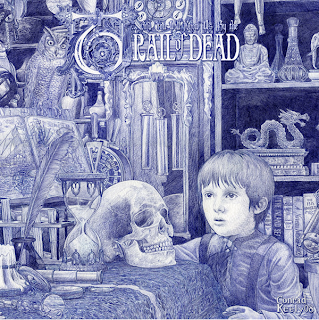 Perhaps a lot of recognition and showing no sign of backing down is one of the most things that happens to an up and coming band when they get a lot of recognition and word of mouth. And one of the most astounding bands to come out of Austin, Texas since launching in 1994, And You Will Know Us By the Trail of the Dead have took me by surprise and it goes to show that these guys would take the genres of alternative, punk, art, experimental, and the prog genre up a notch and give the underground scene a huge stamp of approval.
I first heard and read about the band back in the summer of 2009 when they were mentioned in the very first magazine issue of Classic Rock Presents Prog and I heard some snippets of their work and was completely blown away from not just the raw power they have brought to the soundboard and creativity, but how pummeling and spacey with a sonic structure in their own concept.

That and their sixth album, The Century of Self, are the band’s mind-blowing spiritual journey albums to come out of the end of the noughties and their eruptive pieces ever. And while Conrad Keely, is the commander in chief of the band, he’s also an illustrator with a love of the Marvel Comic universe as of designing the cover of the album that captures an essence of the comic book world, but a tribute to the gatefold sleeve of the golden era of the 1970s.

Explosive guitar riffs, dynamic keyboard and drum sounds, and Keely’s vocals makes it a sci-fi adventure that would open the doors to set the tone on what is about to come and what journey’s you will discover when listening to this album. Take for example, the uplifting tempo Fields of Coal that goes from soft to a fast driven dreamland finale through a melodic vocalization, pumping drums, and goes into a somewhat soaring sound into the clouds into space finale that would have your jaws dropped.

Meanwhile, thumping epics like the swirling Isis Unveiled, Halycon Days, and the spooky touch on Bells of Creation are somewhat like a mini-opera that Conrad himself had wrote as if he was writing them as a graphic novel for different characters set in an alternate universe that go into darker territories that are filled with tension and make it explosive and jump in different areas that the listener would leap out of their seat and take notice of different parts of the compositions.

Elsewhere, the two-part Insatiable that goes into this grand piano waltz that sounds like something out of the sessions of Radiohead’s OK Computer as Conrad sings so beautifully that you almost couldn’t let go of. Then on part two, after the alternative rock sounds of Ascending and the Yes-like moogy classical chambers of An August Theme that segues into the finale, it goes back into the waltz, but it becomes a finale that goes walking into the yellow brick road letting everyone know that it’s okay and it’s time to move on.

The Century of Self is an amusing album that the Trail of Dead had put out back in 2009 and had some of the critics and fans dividing a line in the sand to decide if they should go back to their alternative roots or not, but all in all this a must listen to record that they have brought to the table.
Posted by znathanson at 11:05 AM

I have been looking for something like this, thanks! I think all of this helpful info are so helpful. Bookmarked, I Well check back later!

Brilliant article I master some new things today. Many thanks google to receive me the info I wanted, stick with it.


Shame on Google for not positioning this post higher!


An additional wonderful website gone through by way of my freakin awesome brain :0)


Excellent post. I learned a lot reading it. Thanks.


Maybe you could write next articles referring to this article. I wish to read even more things about it!