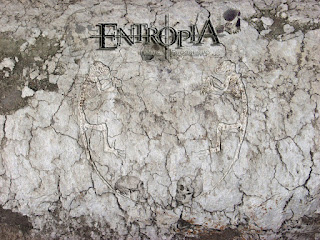 The first time I’ve heard about Entropia, was through an e-mail by one of the band members from Opensight in the city of Colombia and he asked if I could review one of their debut albums, Simetria. It was an offer, I couldn’t refuse. Now even though I have mixed opinions about downloads and iTunes which I don’t want to get into the politics about it, I thought their debut album released in 2010, was pretty good.

Carrying the sounds of Progressive Metal like no other with weird time signatures, growling voices and storytelling complex that would make it a perfect concept album, now in the year of our lord 2012, they released an EP called Evolve and it shows that while they have a long way to go, they have shown that they are not giving up. Thoughts Confined, the new song, which is a video you can find on Facebook and on YouTube as well, is a rapid yet poundering eruption that is completely a well-balanced shredded roar.

With its growling vocals and guitar sound doing lead solos, will remind listeners and metal headbangers including prog fans of Mastodon and an earlier prog death metal thrash version of Opeth’s Mikael Akerfeldt. And even though the music video shows a man in a strait-jacket trying to break free from the asylum, shows that Entropia that they’re giving MTV, the middle finger. They still carry a bit of the heavy atmosphere and adding a bit of the synthesizers to the core to make it sound power metal and sounding like its 1984 all over again.

Example, Burden which opens the EP, carries a bit of the Power Metal sound with a bit of vengeance. The keyboards are like a hard energetic force in the power that Entropia have brought to the table and in their sound and vision. But they have brought the heavy guitar rumbling with a dosage of fantasy and mellowing passage way to stream like a bullet train going along for the ride.

As for Fragmented, which has this futuristic thrash attitude of anger that is very sci-fi and twisted compositions with the usage of the guitar and keyboards setting the atmosphere to a thunderous finale to close the curtains with a flash of lightning, Entropia’s new EP is a very powerful yet wonderous adventure of the progressive metal sound in the scene in Colombia. And while they are carrying the sounds of Opeth and Dream Theater, I imagine they listened to Mastodon’s Leviathan before working on the EP. This is a listenable metallic playthrough album from start to finish, yet you might want to fasten your seat belts to enjoy the ride.
Posted by znathanson at 9:02 PM