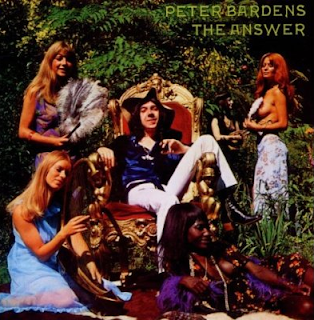 While he’s probably known for his work with Camel, the late great Peter Bardens is not just your ordinary keyboard player, he is one of the most under-rated keyboard players in the realms of Soul/R&B and the Progressive Rock sound of the 1970s. His first solo album, The Answer, originally released on the Transatlantic label in 1970, shows Bardens taste of Psych, Blues, and the Prog genre blended together in a mixer and seeing what the drink taste like. For the Camel fans, this is a special treat as Bardens brings friends of his including Peter Green of Fleetwood Mac who was un-credited from the album, Bruce Thomas, and Linda Lewis, it proves that listening to this album makes you feel that you’re in the studio and have your mouth dropped as Bardens goes to work with his playing.

The opening title track, which opens the album up as the curtain rises for the first act, has more of an orchestral bluesy rock flavor between Bardens and Green as they come up with some different arrangements on the organ and guitar swirl into as Bardens goes into the spacey fairy-tale mode on the Hammond. The blues sound is still kicking into full gear because Pete himself was a part of the scene in the ‘60s as a session musician with help from Them, Shotgun Express, and The Village and he wants to make sure the genre is tight in full gear on The Answer and he got the puzzle added together spot on.

On Don’t Goof with a Spook and I Can’t Remember, he goes into the full driving mode as he takes the tunes into Stax town while I Don’t Want to Go Home is more of a psychedelic laid-back crisp warm sunrise and Let’s Get it On is a further up the road shuffle blues rock feel between Peter Green, Peter Bardens, and female vocalist Linda Lewis as they take the song for a drive up the Chicago label of the Blues, Chess, and make it sound of the ‘60s sound and give it a huge twist.

Then, it leads up to the 13-minute epic in which it would later become a live favorite with his start with Camel. The epic, Homage to the God of Light, is his baby as he takes the listener into a wonderful experience that you’ve never heard before from beginning, middle, and end as he goes through a dramatic and yet, star-gazing adventure with his organ. Peter really lays down the organ well as he shows his skills as the guitar, drums, and bass give him a chance to take over as he lays it down to really set the beat going.

Now we come to the two bonus tracks that Esoteric has lay upon us from his work with the short-lived band, Village. The swirling Man in the Moon is a dazzling outer space single as Long Time Rocker, which features a militant upbeat rockin’ tempo with a rumbling finale. Camel fans really should take notice of. And even though Bardens has passed on, his legacy still lives on and The Answer is one of those fine rare gems to make you really take a huge notice of.
Posted by znathanson at 1:00 PM

A truly underrated keyboardist.
Bardens will be missed.
Back in the day when I was playing in bands we played three Camel tunes. Earthrise, Nimrodel Procession White Rider and Mystic Queen. We never got tired of playing them. In fact from our bands point of view they were the highlights of our evening.