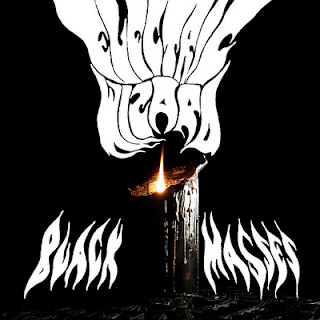 Electric Wizard have been around since forming in 1993 and are reviving the Doom Metal genre as if they were carrying the Olympic torch and carrying to the Pompeii Amphitheatre in Rome. Which is why you have to understand this is probably one of the best bands to come out of the genre and are following in the footsteps of; Black Sabbath, Black Widow, and Pentagram. It quite understands that they are carrying the sound and taking it like a little suitcase and seeing where the music would take them into another dimension. With Black Masses, their follow up to their previous album, Witchcult Today, shows that they have a lot of the fierce and sinister psych-proto-metal sounds in their instruments like a flaming tribe.

There is a lot of how Black Masses stands as one of the most powerful albums that Electric Wizard put on from start to finish. Their songs flow like a magic carpet and imagine how they can push the buttons up than ever. The surprising thing is how they work together and create a suspenseful yet dramatic horror film score to be more evil than ever. The guitars and bass sound like a fuzz tone dooming device that makes it a tightrope that is pulled tight and the music is booming than what Sabbath did on Master of Reality. If it was made for a score of the 1973 cult classic, The Wicker Man, Electric Wizard’s Black Masses is one of them and while the songs have a post-apocalyptic atmosphere and perfect to take a puff and smoke the hugest bong ever, then Black Masses is the perfect stoner album to be played up to a higher voltage.

The opening title track starts the album like a Grindcore film as Jus Osburn comes out of the cage with vengeance with his heavy Iommi-guitar riffs that would have made the master proud. There’s a huge roar and sinister feel that makes this number, almost as if the monster has been released violently from the cage and raging attack on a Utopian city. This track has a very disturbing vertigo swirl with a punch that would have had Electric Wizard become working on the Hammer Film revival and would have open Download to a roaring crowd and would have given Black Sabbath a warm reception including the Prince of Darkness and the late Ronnie James Dio as well.

The 7-minute piece, Venus In Furs starts off with a woman’s high-pitch scream as if she was inside the Iron Maiden tortured to death and dying a horrible death before going into a disturbing yet vicious vision of the lunatic ready to kill his next victim a-la Clockwork Orange rape-in-the-woods scenario with its muddy bass lines, sneering guitar licks, feedback chaos, and double-tracking vocals filling the atmosphere into uncharted territory. But it’s not a film score that Electric Wizard might not be interested in doing, which might happen hopefully in the future, the sonic militant pounding rocker Night Child, is a Venom-inspired metallic-razor-blade-roar as Jus Oburn, almost as if he’s Ozzy Osbourne’s stepson and does one hell of a job with his vocals, cries like a madman inside the asylum waiting to be free in his voice, but hallucinations still haunts the lunatic as they are in for the kill for revenge. During the midsection, Liz Buckingham scares the listener with her guitar solo.

She goes through various solos in Stoner, Mud, and Doom on this track while drummer Shaun Ritter does him homage to Bill Ward as Tas Danazoglou’s bass line is a psych-dooming sound in his fuzzy metal tone on his bass to give it a real crunching taste. And the unsung heavy metal bands Angel Witch and the Lemmy-era of Hawkwind sound is quite breathtaking which is evidential on Black Masses and their statement on the 6-minute, Patterns of Evil. There’s a flowing riff that Jun and Liz do as if they were brother and sister team deciding who can come up with the psychedelic wah-wah powder keg guitar sound as the Muddy Bass lines are back in full swing that Taz does to please Sabbath’s earlier days while Satyr IX comes with a mellowing yet evil sound of the Sabbath Bloody Sabbath-era meets a dooming version of Krautrocker’s early beginnings of Stoner Metal, Amon Duul II. This is wonderful track as each of the instruments becomes a psych jam groove and then the piece which could have been the Utopia that was a wonderful place becomes hell in a hand basket as vicious virus addicted animals drug-addicts run buck wild to kill the master who build the place and make their city theirs and become folk heroes in a messed up way.

Now we’re back again in the streets with the Black Sabbath sound. It seems that while Electric Wizard were carrying a lot of the Black Sabbath records mixed in with Bloodrock, Steel Mill, Black Widow, Budgie, and Pentagram in their bags. And just before they played the first note, they would listen to the albums and do research on them and ask themselves, “Okay, how do we pull this off? Do we make excuses or just go at it with a bang and give the nu-metal pansy assholes the middle finger?” Turn Off Your Mind has the futuristic hellish prison taste of swirling taste ingredients of flavor and they go into a haywire mode to push the buttons into a fierce bullet train to hell. Scorpio Curse is again vicious, proto-psych metal, and darkest composition that Electric Wizard have written and the closing track Crypt of Drugula is their homage to Krautrocker’s Faust and Amon Duul II as if they teamed up to write a sequel to Dance of the Lemmings. With its avant-garde noises, feedback sonic noises, and disturbing scenes that is straight out of Dante’s Inferno, it’s almost as if the monster has been defeated and the dawn has approach the castle destroying the layers of the vampires in every sense.

This isn’t an album to be played on the top 10 charts nor on corporate radio stations who play Stairway to Heaven for about 500 times, Electric Wizard’s Black Masses is an impressive doom metal album that is evil, dark, hidden, and sinister. One of the revival sounds of the genre has come back with a vengeance and with anger ready to go on the attack. The sounds of Doom Metal and the torch of Black Sabbath is in their palm of their hands ready to see where the road will lead them to.
Posted by znathanson at 3:11 PM