Opensight - The Voice of Nothing 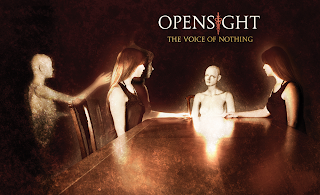 Did I just catch another sound in the roaring sound of Progressive Metal? Coming from Colombia, Opensight is carrying the sounds of: Dream Theater, Tool, and the Blackwater Park-era of Opeth. But their debut album, The Voice of Nothing, is definitely worth checking out. This illustrates their fierce guitar work, progressive sounds in their footsteps, and almost could have been recorded in the ’80s while recording next door with Metallica as if they were Symphonic Metal.

So while they pay homage to their Prog Metal heroes, including the Prog-Psych sound as well, and the militant guitar sounds of Iron Maiden. And of course, the singer sounds like Maynard James Keenan, the sound is spot on. This album goes for the energetic level and comes up like a flying magnetic machine going for the kill.

From the ferocious opening of Only When, is a real volcanic track. In their Tool-like sound momentum, Opensight become aggressive with this number but with this dramatic number, it is very futuristic and post-apocalyptic, along with their homage to the Math Rock dosage. Probably one of the most time changed signature of the debut album, Former Heroes goes for the kill between a guitar duo and driven pounding drum section along with a moody new age guitar solo in the midsection. This is the real treat that could be for an opening number for a horror film.

While Opensight have the Prog flavor to the mix, they lead us into jazz-psych-metal territorial waters in Deleted Scene, a terrifying roller-coaster ride that is very much a reminiscent of Symph Psych Metal sound of Ayreon. After the shattering three tracks that would have Oversight open for Within Temptation and give the audience a jaw dropping performance, Opensight go 500 miles per hour again with the fast-sped turned ‘70s rock sound of eclectic prog with Absolute Truth while the closing track, Skeptic’s Creed could have been a sequel to Madder Mortem’s Where Dream and Day Collide as the inject more of the Prog Metal sound and gives a prime kick-ass debut that is out of this world.

If Within Temptation held a secret conference room in Colombia, Opensight would open for them to welcome them with a huge amount of respect. The point is that this album is a mind-boggling debut for any Progressive Metal fan to put in their Prog collection. The evidence is here in the flesh.
Posted by znathanson at 10:39 PM